The Asia-Pacific trading week will kick off with Japan’s second-quarter gross domestic product (GDP). Japan is slated to release its preliminary Q2 GDP data, with analysts expecting the figure to cross the wires at 0.7% on an annualized basis, according to a Bloomberg survey. The island nation will avoid going into a technical recession if expectations prove correct after growth in the first quarter slipped 3.9%. However, the economic data is unlikely to change the calculus of the Yen, as is usually the case with domestic data. Instead, safe-haven flows will likely continue to be the currency’s price driver in the near term.

USD/JPY moved over 0.50% lower last week after traders sold the US Dollar following a horrid consumer confidence report. That benefited Yen safe-haven flows. The University of Michigan’s consumer confidence index plummeted to 70.2, its lowest level since 2011. Analysts expected the sentiment gauge to cross the wires at 81.2. The data stunned markets and sent the Greenback sharply lower against most of its peers. The underlying mechanism tanking the USD was a rollback in Federal Reserve rate hike bets. The chance for a 25 basis point rate hike at the June 2022 FOMC meeting dropped from 21.3% to 16.1% in response to the data. 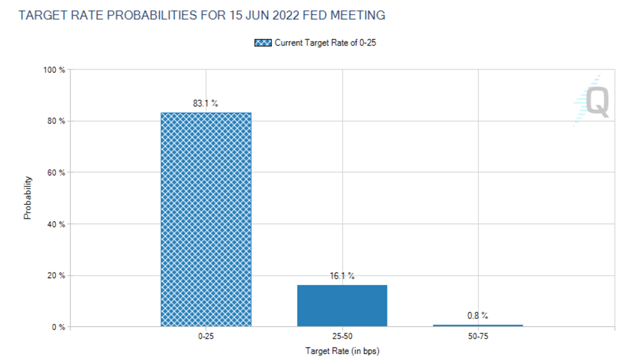 Elsewhere, the economic docket for the remainder of today’s session is sparse. Markets in India will be partially closed for the Parsi New Year holiday. Exchanges in South Korea, including the KOSPI, will also be closed for Liberation Day. This may translate to lower trading liquidity, assuming no high-impact news events develop. Instead, traders are likely keeping their eyes on a set of Chinese economic data scheduled for release later this week, which includes industrial production, retail sales and unemployment data.

Speaking of China, the major economic hub is seeing sporadic yet consistent Covid outbreaks, likely driven by the highly transmissible Delta variant. China continues to take a strict approach to contain outbreaks. So much so that the Ningbo-Zhoushan port saw one of its terminals shut down after a worker tested positive for Covid. While shipments are being diverted, the terminal closure may add to some backlogs in the port. Chinese authorities haven’t announced a reopening timeline for the terminal.

Japanese Yen strength accelerated late last week, with USD/JPY breaking below its 100-day Simple Moving Average. Downside appeared to ease once at the 61.8% Fibonacci retracement level from the May to July move. Further downside will see the 78.6% Fib shift into focus, which coincides with the August low. Alternatively, USD/JPY bulls may attempt to recapture the 100-day SMA on a rebound. 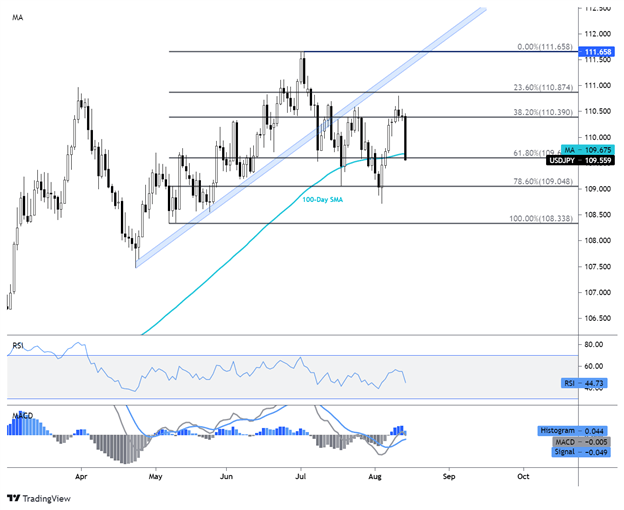