AUD/USD Under Fire as Australian Lockdowns Ramp Up, Risk Trends in Focus

Asia-Pacific markets face a shaky open to the week after Australia tightened lockdown measures in Sydney, the country’s most populated city, over the weekend. The New South Wales (NSW) capital city saw a range of added restrictions since Friday, including a shutdown of non-essential retail storefronts, as policymakers scramble to contain a new wave of infections driven by the highly transmissible Delta variant. The risk-sensitive Australian Dollar has taken a beating over the last few weeks as traders’ optimism about the Australian economic recovery soured.

Japan is also facing a resurgence in cases. The Tokyo Olympic Games open July 23, and close-contact measures put in place are already being put to the test as arriving athletes test positive for the virus. Like Australia, Japan has struggled to vaccinate its population, which has many worried that Olympic arrivals from around the world may cause an outbreak in the general population. Last week, the Bank of Japan (BoJ) downgraded its gross domestic product (GDP) growth forecast from 4.0% to 3.8% for this year. For its part, the Japanese Yen has benefited from safe-haven flows over the past few weeks.

In energy markets, OPEC+ reached an agreement that will end the recent stalemate over production cuts and allow more oil to reach the global market. Saudi Arabia and the United Arab Emirates (U.A.E.) compromised on a rework of the baseline used to calculate output quotas. The deal will see an increase of 400,000 barrels per day starting in August. The U.A.E. will also receive its sought-after production-quota bump, but not until next spring. Despite allowing more oil into the markets, the revamped deal will likely reduce uncertainty about the energy cartel’s collective strength, which could see prices resume climbing higher in the near term.

Prevailing risk trends will more than likely drive market direction this week, with little in the way of high-impact event risk on the economic calendar. The European Central Bank (ECB) will release its July rate decision later this week, with central bank watchers expecting a continuation of its dovish stance. Australia will see minutes from the latest RBA meeting cross the wires, as well as June retail sales and July PMIs.

The Australian Dollar’s recent descent against most of its major currency counterparts is likely to continue, particularly against the US Dollar, which – like the Yen – is seeing support from haven-seeking bids. The pace may slow however, with several weeks of decline having already reflected the pricing-in of prevailing headwinds. Lockdown measures may also begin to bear fruit this week. If the daily case count begins to tick lower, that may offer the Aussie Dollar a lifeline.

The Australian Dollar broke below its September swing high versus the Greenback last week, opening the door for further losses. An area of resistance-turned-support from the second half of 2020 may underpin prices. A break lower would put the 200-week Simple Moving Average (SMA) into focus, currently at 0.7232. To the upside, a recapture of the September swing high (0.7413) could give bulls time to regroup before attacking the falling 20-day SMA. 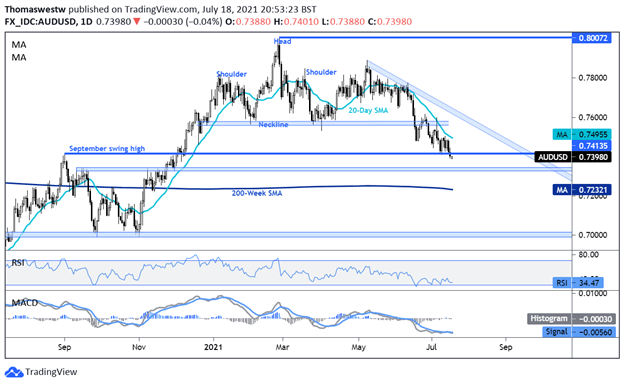