Across the globe, health officials have become increasingly concerned over the spread of Covid’s highly transmissible Delta variant. That spread has led to lockdowns being enacted across Australia over the past 48 hours. Accordingly, the Australian Dollar has come under pressure. New South Wales (NSW), the Australian state that includes the country’s most populous city Sydney, announced a two-week lockdown earlier this week across several of its regions, including Sydney.

Australia has been applauded for its initial success in controlling the Covid outbreak. However, the government has lagged in securing enough vaccines to sufficiently protect its population, heightening the chance for ongoing outbreaks. Currently, only around one of every four Australians have received at least one vaccine dose, according to data government-sourced data. The current lockdown may roughly translate to a A$2 billion haircut to annual gross domestic product, according to Morgan Stanley and AMP.

The AU ANZ Roy Morgan Consumer Confidence Weekly report for the week ending June 27 will cross the wires this morning, giving further insight into how Aussies view the current and near-term economic conditions. The weekly data point rose to 112.4 last week. A weaker print, along with the recent lockdowns, may bode poorly for the Aussie Dollar. Bets for the Reserve Bank of Australia (RBA) to make a hawkish shift in the coming months may also be in danger, which could further strain AUD.

Elsewhere, Wall Street closed the opening day of trade on a high note, with the tech-heavy Nasdaq 100 index seeing a 1.25% gain. Financial stocks progressed higher after the New York closing bell on a slew of dividend announcements where banks like Goldman Sachs and Morgan Stanley boosted investor payouts. Treasury yields fell along with crude oil prices.

AUD/USD’s overnight loss put it square up against its 200-day Simple Moving Average (SMA). The key moving average has been traded through twice over the past several weeks. A drop back below may lead to further losses. Still, the currency pair may be seeing a degree of confluent support from a former Head and Shoulders pattern’s neckline. 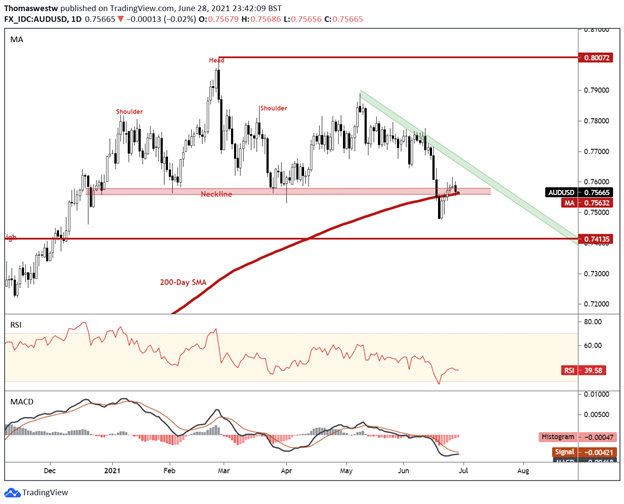