Labor market conditions remain positive despite the JobKeeper wage subsidy program ending earlier this year, in line with the Reserve Bank of Australia’s outlook on employment. The indexe’s inflation gauge eased slightly after months of building prices, likely due to the weakening seen across the commodities market. The Australian Dollar’s upward momentum extending from overnight was unchanged on the figures crossing the wires.

Outside of the Australian Dollar, crypto markets have seen a roller coaster day, with Bitcoin briefly dropping below the psychologically imposing 30,000 level before recovering and turning positive on the day as the New York closing bell rang. The cryptocurrency – which measures the largest by market capitalization – is barely hanging onto its year-to-date gains, with wild swings over the past several months.

Wall Street saw broad gains during Tuesday’s session, led by the technology heavy Nasdaq 100 index, closing 0.94% higher. Retail stocks also outperformed, with Kohl’s and Target joining Amazon on a ride higher. Optimism over the economic recovery in the United States has grown stronger amid rising vaccination rates into the summer.

The Richmond Federal Reserve Bank’s manufacturing index rose to 22 from 18 for June, indicating a faster pace of economic expansion in the region that spans from the District of Columbia to West Virginia. Treasury yields saw a further flattening of the curve on Tuesday, extending Monday’s government bond market action, and indicating a potential risk-on signal to equity markets.

Japan will report PMI figures later today. The island nation is preparing to kick off the 2021 Olympic Games about a month away. While health officials are concerned over the world’s largest sporting event adding to Covid troubles, daily cases and deaths have been on the decline since hitting a peak last month. Japan has taken multiple steps to bolster vaccine numbers, including allowing healthy workers outside of doctors and nurses to administer vaccines.

Elsewhere, Reserve Bank of Australia Assistant Governor Luci Ellis will speak in Adelaide. Market participants will be keying in on the central banker’s commentary regarding the labor market and how it relates to monetary policy. A payroll report released earlier this week showed that the recent Covid lockdown in Victoria, according to the Australian Bureau of Statistics.

The Australian Dollar is moving into its third daily gain following last week’s sharp drop versus the US Dollar. However, the currency pair faces a major test, with the 200-day Simple Moving Average (SMA) lingering just above the current trading level. The MACD oscillator’s weakness appears to be moderating, a sign that bearish pressure has eased on AUD/USD. Moreover, the key moving average is joined by the former neckline of a Head and Shoulders pattern, which may pose as a level of resistance. 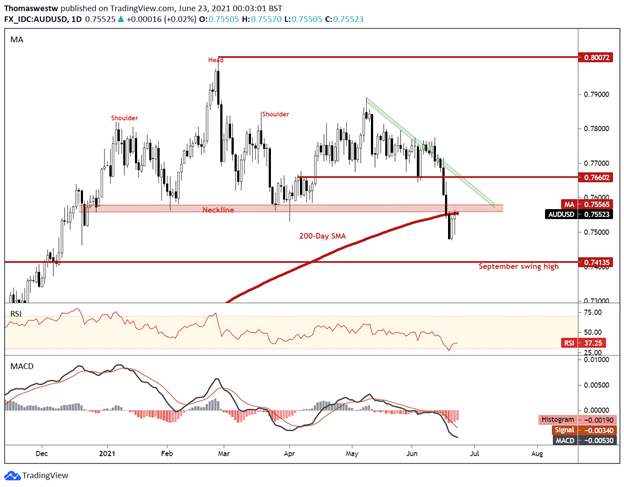