The New Zealand Dollar rebounded overnight against the US Dollar, ending a multi-day drop in NZD/USD following the Greenback’s FOMC-induced surge. The Westpac McDermott Miller consumer confidence index jumped to 107.1 in the second quarter, up from the Q1 figure of 105.2, according to the DailyFX Economic Calendar. Despite the jump, the index remains below its long-run average. Optimism is running high for the island country as the world makes progress against the pandemic, which will open New Zealand’s economy back up to tourists’ dollars.

Equity markets across the Asia-Pacific region sold off to start the week, with Japan’s Nikkei 225 index putting in a 3.29% drop. Tuesday’s session may fare better following a rebound on Wall Street in Monday’s New York trading session when the benchmark S&P 500 index gained 1.40%. Crude oil prices rose overnight as talks between the United States and Iran continued with little progress.

Markets are still weighing the implications of the Fed’s accelerated timeline on tightening policy. That said, traders may not be too keen to dive back into risk assets just yet. While the risk-sensitive US Dollar pulled back after a big run following the Fed rate decision last week, the Greenback remains near a multi-month high via the DXY index.

Elsewhere, Bitcoin traded over 10% lower overnight as regulatory fears intensified. China continues to crack down on mining operations. The Global Times reported earlier this week that local authorities in China’s Sichuan Province – a major cryptocurrency mining hub – ordered mining operations to shut down. The move is part of a larger effort by Chinese authorities to curb the digital assets’ potential impact on financial risks.

New Zealand will see another economic print cross the wires today in the form of credit card spending, which could provide insight into consumer financial health in the island country. Later in the day, Taiwan will release unemployment date for May. Tomorrow, markets will key in on Australia’s PMI figures for June.

The New Zealand Dollar rebounded versus the US Dollar overnight, rising from a brief push into the lower levels traded at since November 2021. NZD/USD is coming up against a former support area from early April trading, with the recently breached 200-day Simple Moving Average (SMA) lingering above. The Relative Strength Index (RSI) has moderated along with the MACD oscillator, however, the latter remains in a very weak position. Overall, the outlook is tilted to the bearish side given the currency pair’s posture below the key 200-day SMA. 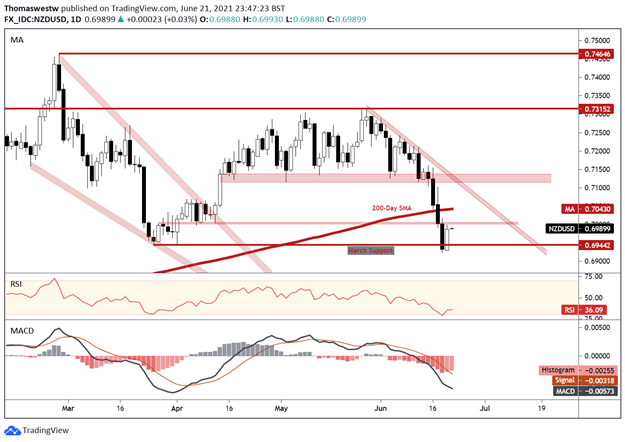