Asia-Pacific markets look more than likely to end the week on a downbeat note as the post-FOMC market reshuffle continues. While the Treasury market appeared to moderate, with the benchmark 10-year note’s yield dropping nine basis points, the safe-haven US Dollar’s runup remained unencumbered. The DXY index briefly rose above the 92 handle before scaling back, although the USD-tracking index remains over 0.50% higher on the day.

Commodities are another story, however. The US Dollar’s surge higher is the most likely culprit weighing on the space. Given a large chunk of commodities purchasers deal in US Dollars, a rise in the Greenback results in fewer USDs being necessary to buy assets such as lumber and copper. That intrinsic repricing is what we are likely witnessing this week.

One notable breakdown within the commodities space as of late is lumber. The building material rose over 100% this year through May but started to tumble into June. Currently, prices are down over 50% since the May swing high and broke below the 200-day Simple Moving Average overnight, a testament to the bearish vigor beating prices down. The drop coincides with the Fed’s “transitory” outlook on inflation, although end-point user prices will likely take weeks, if not months to reflect the drawdown.

On the economic docket, the week will wrap up with a rate decision from the Bank of Japan (BoJ) at an unspecified time somewhere around midday in Tokyo. The Japanese Yen may however focus on other market developments given the central bank’s typically static stance on policy. Next week’s economic calendar is rather void of high-impact events, which will leave traders more susceptible to prevailing risk trends.

The Australian Dollar has ceded significant ground to the US Dollar over the past 48 hours, with AUD/USD now at the 200-day Simple Moving Average (SMA). Moreover, the move lower broke below a support level seen earlier this year that made up the neckline of a Head and Shoulders pattern.

Further weakness could see prices fall to the September swing higher. Alternatively, bulls may attempt to vigorously defend the 200-day SMA and push prices back above the former neckline area. RSI is moderating just above oversold levels, while MACD continues to throw bearish signals as it moves lower. 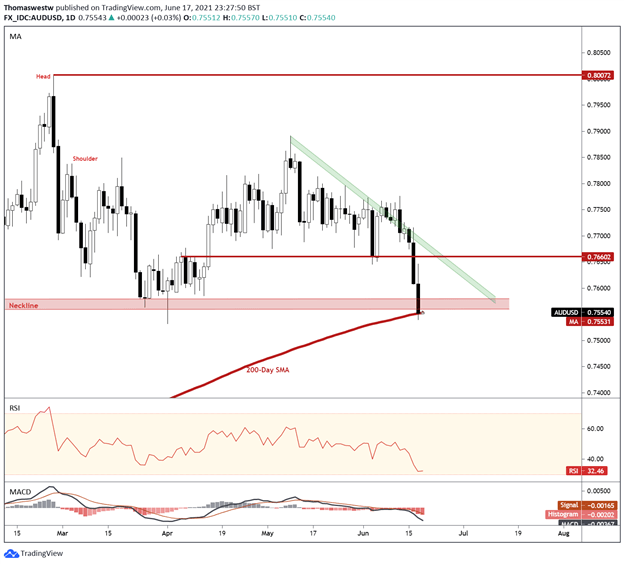