Asia-Pacific markets could be vulnerable after a lackluster performance on Wall Street where the major indexes traded slightly lower. Small-cap stocks outperformed, and technology stocks to a lesser extent, with the Dow Jones Industrial Average (DJIA) dropping 0.36%. The VIX “fear gauge” traded unchanged while the US Dollar eased.

Treasury yields climbed modestly, extending gains from Friday, as the Group of Seven (G-7) industrialized nations agreed to a global minimum tax on corporations. The rate of 15% is aimed at stopping the “race to the bottom” on corporate tax rates. Broader talks between over 100 nations will commence next month. A strong argument can be made over a global minimum tax spurring inflation by squeezing corporate margins, which could explain the Treasury weakness.

The risk-sensitive Australian Dollar and New Zealand Dollar both rose overnight against the Greenback despite weaker-than-expected data out of China on Monday when the economic powerhouse saw exports and imports miss analysts’ expectations. The May trade receipts showed a surplus of $45.54 billion versus an expected $50.5 billion. The Yuan has seen little reaction, with USD/CNH hovering just above the 6.38 handle.

Today’s economic calendar has Japan’s finalized first-quarter gross domestic product (GDP) set to show a -4.8% drop on an annualized basis, according to the DailyFX Economic Calendar. Australia will later report new home sales for May along with the NAB business confidence print. The US CPI print is also on the radar for later this week, with the event potentially having a large sway over global sentiment as traders mull taper talks for the Federal Reserve.

Market sentiment may face a headwind from the ailing crypto market, however. Bitcoin is adding to recent weakness, with BTC/USD dropping nearly 5% over the last 24 hours. The digital coin has been plagued by a series of negative headwinds lately, with a tweet from Elon Musk late last week sending another wave of negative sentiment through BTC bulls.

Bitcoin is up against a major support level well defined by the 61.8% Fibonacci retracement level from the late May swing low/high. Technically, Bitcoin is in a weak position, below its 20-, 50-, and 200-day Simple Moving Averages. Moreover, the 50-day SMA may soon cross below its 200-day SMA, which would complete a bearish death cross, and potentially drag prices lower. The 30,000 psychological level would be a near-term bearish target.

News that the US Justice Department (DOJ) seized 63.7 Bitcoins from the DarkSide hacking group responsible for the Colonial Pipeline attack may also be dragging on cryptocurrency sentiment given the apparent capabilities available to US law enforcement agencies to track crypto wallets. According to the DOJ statement: 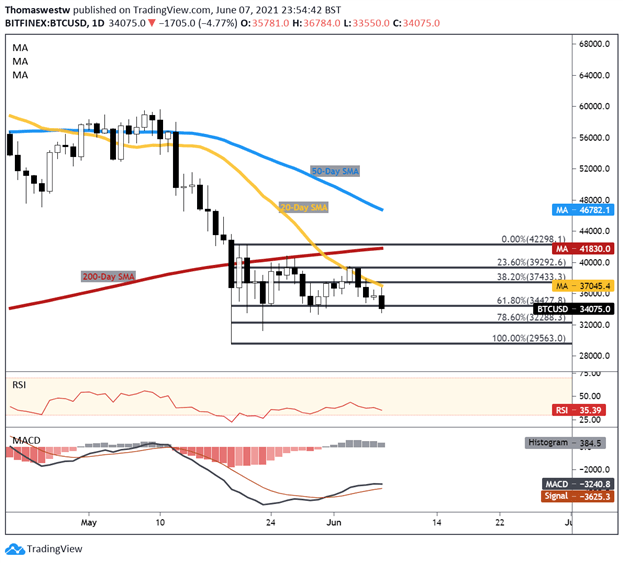