Asia-Pacific markets may see some overhead pressure to end the week. Chinese markets may face additional weight following a move from US President Joe Biden to blacklist Americans from investing in military or surveillance ventures linked to the People’s Republic of China (PRC). The move – which came through executive action – is the latest escalation between the US and China, largely a continuation of the Trump administration’s policy on China.

Thursday’s Wall Street session saw the major US indexes close lower following better-than-expected data on the labor market. According to the DailyFX Economic Calendar, the ADP jobs report for May crossed the wires at 978k versus an expected 650k jobs added. Rate traders took the data as a sign that the Federal Reserve may tighten policy, which will likely begin with balance sheet tapering.

Treasury yields pushed higher in response as US government bonds sold off across the curve. The 10-year yield gained over 2% on the New York closing bell. Friday’s Wall Street session will see the highly-anticipated US non-farm payrolls report (NFP) cross the wires, potentially setting the tone for Monday’s APAC trading.

The rise in yields sent the US Dollar higher, with the DXY index gaining over half a percent. Gold took the Greenback strength on the chin, falling near 2%. The Yuan continued to move off a 3 year high versus the USD, but the recent strength in the Chinese currency still has many – including the PBOC – worried over the export-related hit the Chinese economy could suffer.

China has attempted to balance concerns over Yuan-induced effects on the country’s exports and the desire to bolster the Yuan’s global use as the nation seeks to increase its economic footprint on the world stage. The most recent move from the PBOC saw a measure directing Chinese financial institutions to lift the amount of foreign exchange reserves starting June 15, an increase of 2%. This may pressure the Yuan lower as the onshore US Dollar supply decreases.

The PBOC’s action is a visible one, but it may have little to no tangible impact on the actual exchange rate. Instead, it signals to the market that the PBOC, if necessary, will take action to stem Yuan strength. The implication is a negative one for speculative trades on the currency. Further appreciation could bring stronger government interference. However, China walks a rather fine line between currency intervention and derailing the country’s recovery if it acts too strongly and strangles liquidity.

Turning to the session ahead, the economic event docket is rather light, with May inflation figures out of the Philippines followed by home loan data out of Australia for April. The week will end with a rate decision from the Reserve Bank of India (RBI). The Australian Dollar moved lower overnight against the US Dollar’s post-jobs report move.

Stronger-than-expected home loans data from Australia may bolster rate cut bets for the Reserve Bank of Australia (RBA), which would, in turn, stiffen the Aussie Dollar, but the July RBA meeting remains in focus following the latest policy meeting when the central bank held to its mostly dovish stance and outlook. Also important to note is the aforesaid US-Sino developments, which may be putting overhead pressure on the Australian Dollar given the island nation’s economic link to China.

The move higher in USD/CNH may be on track to continue as the currency pair approaches a 2014 trendline that it recently broke below. MACD is eyeing a cross above its center line as the oscillator moves firmly higher. A cross above its 9-day Exponential Moving Average (EMA) may have traders looking to the moving average for support on the next downside move.

The 38.2% Fibonacci retracement is a possible technical barrier before reaching the long-term trendline, which may likely serve as another technical barrier to the upside. Overall, USD/CNH may continue higher in the near-term but the downside appears to be the path of least resistance beyond a short time frame. 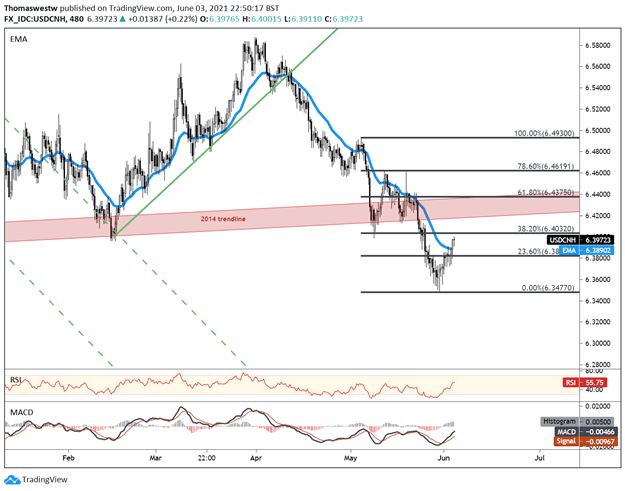