Asia-Pacific markets may open flat following a relatively muted day of trading on Wall Street. The New York trading session kicked June off with a positive ISM manufacturing report for May, recording a 12th consecutive month of expansion in the United States economy at 61.2%, up from April’s 60.7%, according to the DailyFX Economic Calendar.

Despite the upbeat economic data, the US benchmark S&P 500 index closed flat on Tuesday on the first trading day of June, down just 0.05%. The US Dollar traded neutral against a basket of its G10 currency pairs, with the DXY index continuing to hover below the 90 handle. The Greenback’s lackluster performance coincided with traders ditching Treasuries across the curve. The 10-year yield gained near 2% as the NY closing bell rang.

OPEC+, on Tuesday, stood firm on its plan to increase oil output for July, pushing crude oil prices over 2% higher overnight. While the group of oil-exporting countries committed to a July production hike, the cartel didn’t lay out plans for additional ones later this summer. Global demand amid increasingly upbeat vaccination figures is being weighed against the potential for a resurgence in Covid and the Iranian market coming back online.

Elsewhere, the Australian Dollar reversed its immediate downside reaction following the Reserve Bank of Australia’s June rate decision. The Aussie-Dollar tracked higher against the largely muted US Dollar, likely reflecting progress made in the global economic reopening narrative. Australia’s Q1 Gross Domestic Product (GDP) will cross the wires today. Analysts expect the year-over-year figures to come in at 0.6% versus the prior -1.1%. A better-than-expected print will likely bolster the Australian Dollar.

Meanwhile, Australia's Victoria state's most recent snap lockdown is unclear if it will end the one-week measure on Thursday night. Officials enacted the lockdown on May 27 in response to a locally transmitted infection, its first in almost three months. While essential businesses remain open, the lockdown is a reminder that the Covid situation, while improving, remains highly volatile.

The Australian Dollar’s recent move higher against the US Dollar has found resistance at the 20-day Simple Moving Average (SMA) after pivoting higher from the supportive 50-day SMA. Price has trended between the two key moving averages since mid-May. That said, a directional break may occur once either SMA is decisively breached. Until then, the currency pair may see further rangebound trading. The 0.7750 level 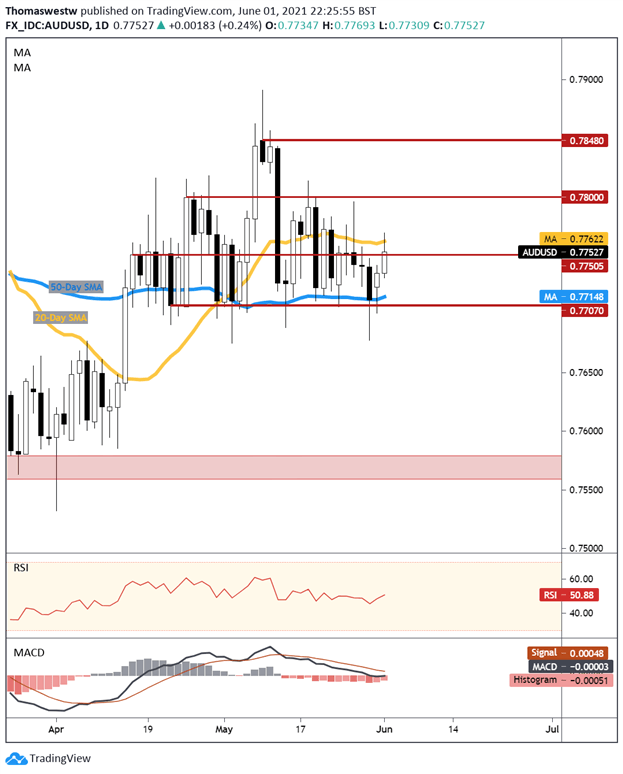