Asia-Pacific markets may see a quiet day to close the week, with a light economic calendar for Friday’s trading session. This would extend Thursday’s dull action in APAC equity markets when the Hang Seng Index moved 0.18% lower. Wall Street trading also offered a rather bland showing despite a robust initial jobless claims figure to start the day. The S&P 500 notched up a 0.12% gain, while the tech-heavy Nasdaq 100 lost 0.33%.

The Department of Labor (DOL) reported 406k new applicants for jobless benefits for the week ending May 22, 19k under the consensus forecast, according to the DailyFX Economic Calendar. The second revision of second-quarter US Gross Domestic Product (GDP) data crossed the wires showing a rise of 6.4% on a quarter-on-quarter basis, matching initial estimates.

A 7-year note Treasury auction followed later in the New York session. Investors showed strong demand, with a higher-than-average 2.41 bid-to-cover ratio. The preceding selloff in Treasuries offered a strong concession for the auction. Bond traders normally sell onto the market before an auction to buy at a lower price. The sale yield came in at 1.285% versus an expected 1.294% bid deadline rate, showing the market’s willingness to buy even at a lower rate.

New Zealand saw the ANZ-Roy Morgan Consumer Confidence index hit the wires at 114 for May versus a read of 115.4 in the prior month. While the was a slight decline, the 114 level shows consumers remain confident. Later today, Japan will report labor data figures, and India’s foreign exchange reserves report for the week ending May 21 will close up the APAC day.

Looking further ahead, the US Personal Consumption Expenditure (PCE) print is a possible high-impact event that could see significant volatility move throughout risk-sensitive pairs like the New Zealand Dollar. The figure is forecasted to release at 2.9% on a year-over-year basis, with a stronger-than-expected printout being a potential headwind for NZD/USD. Markets have been worried that rising price pressures may pressure the Fed to dial back stimulus faster than currently expected, which could strengthen the Greenback.

The New Zealand Dollar’s recent trek higher continued overnight against the US Dollar, although price remains off the prior day’s post-RBNZ intraday high. Still, momentum appears healthy with a rising MACD following a signal line crossover. The recent high of 0.7315 – which coincides with the January swing high – appears to be a technical barrier. A clean break higher would likely see the February multi-year high shift into focus. 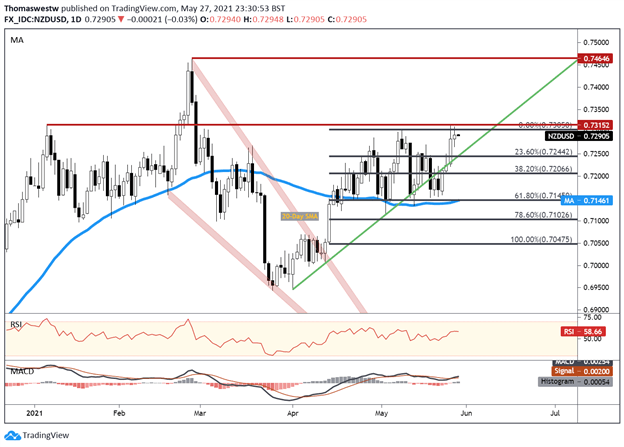