Economic data was light in the New York trading session outside of the EIA report. A group of six Wall Street CEOs from the largest US banks spoke in testimony before Congress. The bank leaders took fire from lawmakers over pandemic-related issues regarding lending and compensation practices. Financial stocks inched higher.

Elsewhere, rate traders exited Treasury positions, pushing the 10-year note’s yield over 1.5% higher. The move saw the US Dollar strengthen, which also put pressure on gold prices. XAU/USD managed to avoid taking a hard hit, however. The yellow metal is grappling with the psychologically imposing 1900 level. Traders are attempting to balance the economic recovery with a potential near-term easing across major central banks’ policy settings.

The risk-sensitive Australian Dollar came under sharp selling pressuring against its New Zealand counterpart, with AUD/NZD dropping to a fresh multi-month low. The Aussie Dollar fared better against the Greenback, but AUD/USD has also moved lower, although not to the same extent seen in AUD/NZD. A recent drop in iron ore prices has injected an underlying weakness into the commodity-linked Australian Dollar.

China will report industrial profits for April today at 01:30 GMT. The March figures crossed the wires at 137% on a year-over-year basis. While a base effect is likely responsible for a large portion of the rise, absent of the effect, industrial profits have been strong. That said, AUD/USD may rise if today’s April figure impresses commodity traders.

AUD/USD has turned lower after failing to decisively breach above the 0.7750 level. The currency pair appears headed back toward its 50-day Simple Moving Average (SMA), which may step in to offer support as it has since early April. Bearish momentum appears to be accelerating, however. The MACD looks to be on track to cross below its center line, a bearish signal. 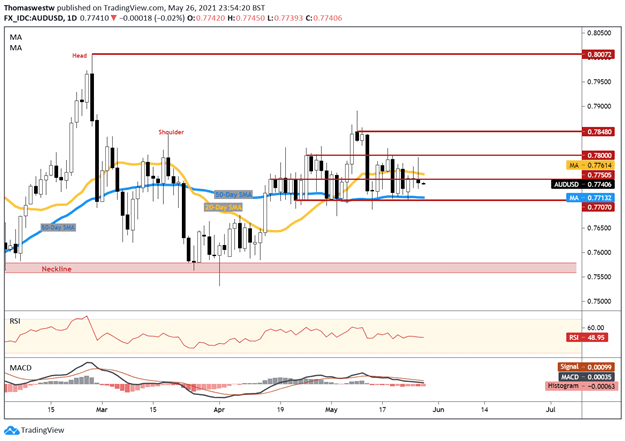