Asia-Pacific markets may be in for a quiet start to the week thanks to a sparse economic docket, leaving traders focusing on several potentially high-impact events later this week. Equity indexes across the APAC region closed mostly higher last week, with Hong Kong’s Hang Seng Index (HSI) recording a weekly gain of 1.54% (though it remains nearly 10% lower from the multi-year high set in February).

However, the positive mood in the equities market didn’t translate into gains for sentiment-linked currencies like the Australian Dollar. AUD/USD moved over half a percent lower on a weekly basis. Losses were also seen on Wall Street, with the benchmark S&P 500 index dropping 0.43% as the VIX “fear gauge” moved 6.59% higher.

Speaking of sentiment, cryptocurrency markets continued to see neck-breaking volatility over the weekend. Bitcoin has dropped nearly 30% in the past week. The digital currency is still up over 200% on a year-to-date basis, but traders began selling heavily last week following a string of negative headlines, from Elon Musk’s tweets to Chinese efforts to step up regulation.

Later this week, markets will be keyed in on the Reserve Bank of New Zealand’s (RBNZ) interest rate decision, set to cross the wires on Wednesday. The consensus forecast is that the RBNZ will hold its overnight cash rate (OCR) at 0.25%. However, traders will be watching for any hawkish shifts in the central bank’s language.

New Zealand inflation expectations have increased, but policy makers have been hesitant to make any moves that could potentially endanger the economic recovery. The Q1 retail sales report crossed the wires earlier this morning at 2.5%, up from the prior -2.7% read on a QoQ basis. The improved figure may add to hawkish bets for the rate decision.

The New Zealand Dollar slipped 1.10% versus the US Dollar last week, breaking below a trendline from the April swing low in the process. The 50-day Simple Moving Average (SMA) and the 61.8% Fibonacci retracement level appear to offer a solid level of support, which has been in place since mid-April. A break below that confluent barrier would likely open the Kiwi Dollar up for an extended move lower. Alternatively, recapturing trendline support would help reestablish the preceding bull trend. 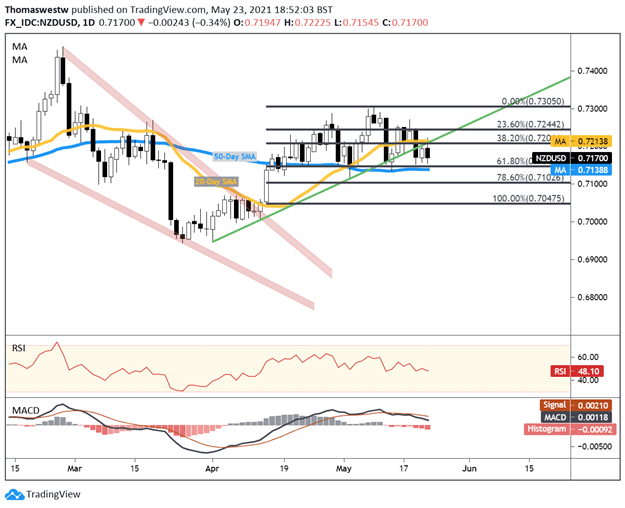