Asia-Pacific markets may see a strong end to the week after sentiment recovered overnight, pushing Wall Street higher. Thursday’s New York trading session saw technology stocks lead gains across the major US indexes, while volatility via the VIX fear gauge cooled. The safe-haven US Dollar saw outflows, with the DXY index dropping below the 90 mark.

Elsewhere, the cryptocurrency market bounced back after a volatile week of trading spurred by Chinese regulatory headlines and tweets from Elon Musk regarding Tesla’s Bitcoin holdings. Given Bitcoin’s clout in financial markets, the recovery likely bolstered broader confidence in financial markets. The crypto space shows some correlation with overall market sentiment, and that correlation appears to be growing stronger lately.

Speaking of market sentiment, the Australian Dollar took advantage of the renewed risk-taking overnight, along with the also risk-sensitive New Zealand Dollar. AUD’s strength comes despite a disappointing employment report that saw the Australian economy lose 30,600 jobs in April versus an expected 20,000 gain. The downbeat figure is largely attributed to the end of the JobKeeper program, which will also likely affect May’s figures as well.

The Australian Dollar is pricing in additional economic data released this morning. Markit Economics released purchasing manager reports on the services and manufacturing sectors. Manufacturing PMI crossed the wires at 59.9 versus 59.7 in April, while services came in at 58.2 versus 58.8 in the prior month, According to the DailyFX Economic Calendar.

Today’s session will also see Japan release inflation data for April. The island nation received positive news this morning when Japanese regulators recommended that the Moderna/AstraZeneca vaccine be approved in a boost to the country’s vaccine initiative. Elsewhere, New Zealand will report credit card spending for April. India will cap off the week with figures on bank loans and deposits.

The Australian Dollar was once again supported by its 50-day Simple Moving Average (SMA), a level of support respected since mid-April. Overhead pressure, however, has kept AUD/USD in a largely consolidative stance since that time. The 0.78 handle is likely a key area to breach before price may extend higher to target its multi-month May swing high. 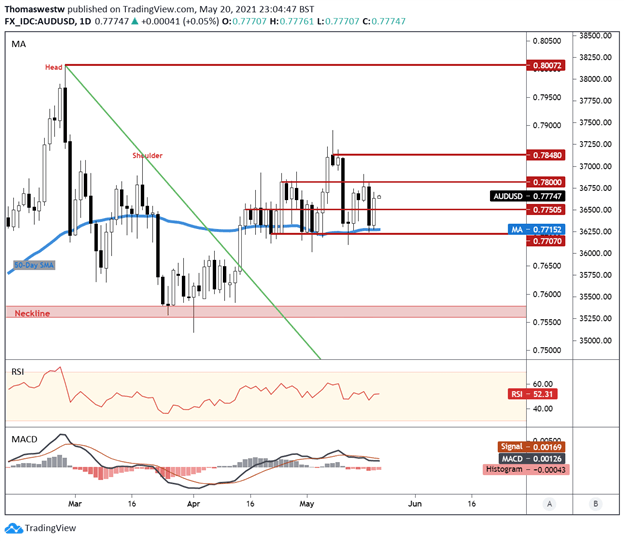