The benchmark 10-year yield rose over 2%, and shorter-term yields saw an even larger reaction, with the 2-year yield pushing over 8% higher. Rate traders pushed yields higher after the minutes showed that it may soon be appropriate to discuss taper talks contrary to what Fed Chair Powell has previously stated. Still, overall, Fed speak remains largely dovish, with expectations for further volatility in markets through the coming months.

Australia will release its April employment report this morning, which will likely drive sentiment during Thursday’s Asia-Pacific session. Analysts are looking for a 20.0k print to cross the wires, according to a Bloomberg survey. A stronger-than-expected report may guide traders to take a less dovish view on the Reserve Bank of Australia’s policy path, which could push the Australian Dollar higher.

Furthermore, Hong Kong will see the April unemployment rate drop after last month posted a 6.8% data point. Due out early tomorrow morning, inflation data out of Japan is the next APAC high-impact event on the DailyFX Economic Calendar. The Hang Seng Index gained 1.42% on Wednesday and will likely see a neutral open.

Elsewhere, the cryptocurrency market continues to come under severe stress, causing a relatively mild but palpable reaction. Bitcoin, the largest crypto coin by market cap, dropped near the 30k level before the “dip buyers” stepped in. BTC/USD remains down on the day, extending its losses from over the weekend, but is now hovering slightly below the 40,000 level.

The Dow Jones made an intraday drop below its 50-day Simple Moving Average (SMA) before recovering a portion of losses. Resistance to the upside appears to be at the 34,000 level, which previously served as a level of support. The 50-day SMA may step in again to underpin prices if sellers return this week, but a break lower would put the indexes’ technical stance at a further disadvantage. 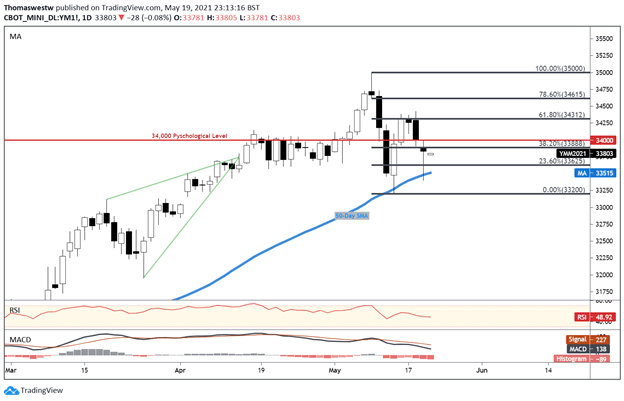