Asia-Pacific markets may pull back from gains seen on Monday after investors on Wall Street rotated out of technology stocks, as valuation concerns and Covid-19 woes linger over the global economic backdrop. The tech-heavy Nasdaq 100 index dropped 0.60% on the day, while the Dow Jones Industrial Average closed just 0.16% lower. A slate of Chinese economic data prints came out mixed on Monday, with retail sales for April falling short of estimates, while fixed-asset investment impressed.

Despite the downbeat New York session, investors sold safe-haven Treasuries as commodity prices rose, potentially reflecting inflationary concerns. Major consumer companies have already stated the intention to pass on some input costs to consumers, the result being higher prices to preserve corporate margins. The Australian Dollar sometimes rises alongside commodity prices, with the island nation being a key exporter of industrial metals like iron ore and copper.

Bond traders keyed in on comments from Federal Reserve Vice Chair Richard Clarida. The Fed’s second-in-command backed up recent Fed talk that tapering balance sheet purchases – which would be seen as the first surefire signal that the Fed is tightening—saying advance warning will be given to markets “before we anticipate scaling back the pace of those purchases.” Nonetheless, the benchmark 10-year rose modestly.

The Reserve Bank of Australia will release minutes from their most recent policy meeting, which could provide traders with further info on the central bank front and the path of monetary policy in Australia. The Australian Dollar is little changed so far this week versus the US Dollar. Absent any rate decisions from major central banks this week, rate traders will parse through the respective minutes for hints on monetary policy outlooks. Later this week, traders will turn their focus to the FOMC Minutes, a potentially market moving event.

Japan is slated to report Q1 gross domestic product (GDP) data for the first quarter. The preliminary data is unlikely to move the Japanese Yen outside of a substantial miss or beat. Analysts forecast the figure to cross the wires at -4.6% on an annualized basis, according to the DailyFX Economic Calendar. Japan’s Tertiary Industry Index will also cross the wires.

AUD/USD’s movement has seen the currency pair trade near last week’s high, recovering intraday earlier losses. The 50- and 100-day Simple Moving Averages appears to provide a degree of support and may step in again to do so on any downside moves. T the upside, a recent area of resistance at the 0.78 level could pressure prices should the Australian Dollar strengthen. MACD and RSI appear mainly neutral, reflecting the recent price action. 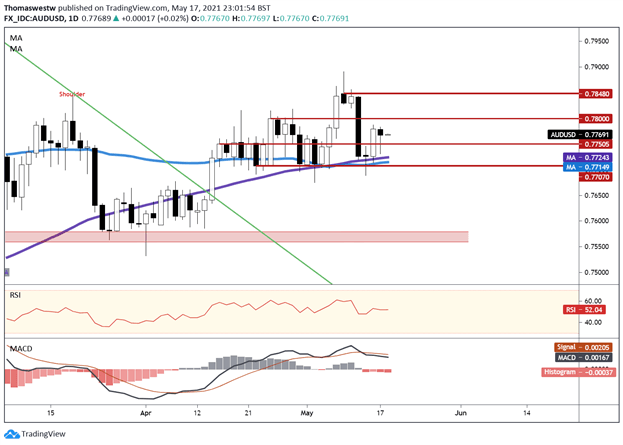