Asia-Pacific markets look set to open higher following a Wall Street session that saw most major indexes rise, with the Dow Jones Industrial Average (DJIA) leading the pack higher to a new record high. The safe-haven US Dollar pulled back as investors’ optimism over stocks rose. The day started with an upbeat 498k initial jobless claims report for the week ending May 1 from the Department of Labor (DOL), the first sub 500k report since the pandemic began.

The Federal Reserve’s Financial Stability Report (FSR) for May crossed the wires following the New York closing bell. The May FSR highlighted the rising prices seen in “risky assets” driven by upbeat economic data, fiscal stimulus, and progress on vaccine distribution throughout the US. However, while the FSR report did cast a positive light on the economy overall, it did note that businesses, as well as households, remain stressed, and particularly among those that are most vulnerable such as minorities and low-income earners.

Elsewhere, the Treasury market saw yields on the longer-side of the curve drop, continuing the trend from earlier in the week. The benchmark 30-year yield dropped under 2.25%, while the 10-year moved slightly lower to 1.57%. The government bond market’s reaction to the better-than-expected jobless data likely reflects investors’ distraction, who are waiting for the highly-anticipated non-farm payrolls report due out prior to Friday’s opening bell on Wall Street. Investors expect the April jobs report to cross the wires at +978k, but some analysts are forecasting even better, looking for a figure north of 1 million.

Friday’s Asia Pacific session will see the Reserve Bank of Australia’s Statement on Monetary Policy cross the wires, followed by PMI data out of China for April. A little later in the day, China will release its trade data for the same month, with the consensus expectation aiming for $28.1 billion. China reported a trade balance of $13.8 billion in the prior month, according to the DailyFX Economic Calendar.

Meanwhile, tensions between Australia and China continue to erode. On Thursday, news crossed the wires that China intends to stop strategic economic talks between the two countries. AUD/USD fell initially but rebounded overnight, likely a result of strength in the US equity futures market. Still, China is Australia’s largest trading partner, and tensions are likely to continue escalating, which puts a question mark over Aussie-Dollar strength.

The Australian Dollar pierced above a former level of resistance overnight versus the US Dollar, with the 0.78 psychological level eyed as the next level of possible resistance. Both the 20-day and 100-day Simple Moving Averages are tracking higher after underpinning prices earlier in the week. Moreover, MACD and the Relative Strength Index (RSI) are turning higher. 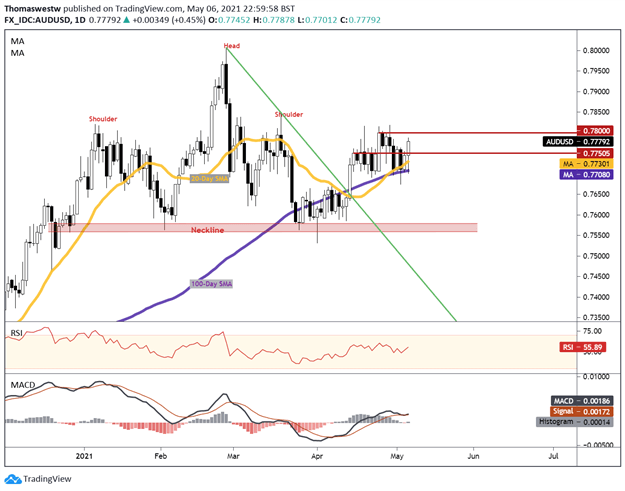