The US Dollar is on the move lower after a manufacturing PMI release from the Institute of Supply Management (ISM) missed the consensus forecast. Greenback weakness is helping to lift precious metals. Gold and silver prices recorded healthy gains, increasing over 1% and 3.5%, respectively. Besides the weaker USD, falling Treasury yields are also likely driving prices higher, with the 10-year yield down just over 2% overnight.

Elsewhere, the risk-sensitive Australian Dollar is up against the US Dollar, reflecting not only broader weakness in the Greenback but also strengthening sentiment in markets. AUD/USD will be in focus today as the May Reserve Bank of Australia (RBA) meeting interest rate decision crosses the wires. According to the DailyFX Economic Calendar, the Australian central bank is set to hold its benchmark rate steady at 0.10%.

The RBA is unlikely to change the message it has conveyed this year, which is to hold rates steady until persistent inflation is seen, along with a stronger labor market. Still, some expect a change to the target bond for its yield curve control from the April 2024 bond to the November 2024 bond, although that move may be premature and is more likely to be announced later this year.

Outside of the RBA decision, markets will continue to have several potentially high-impact economic events to monitor. One being Wednesday’s labor market data out of New Zealand, where analysts expect the island nation to report the unemployment rate for Q1 to remain at 4.9%. Later in the week, the RBA quarterly statement on monetary policy will cross the wires, and the United States will release its highly anticipated non-farm payrolls report for April.

The Australian Dollar is on the move higher against the US Dollar, breaking back above a prior area of resistance seen through mid-April. The move higher stemmed from an area where three key Simple Moving Averages (SMA) have converged, with the 20-, 50- and 100-day SMAs underpinning the daily candlestick. A move higher will aim to take out the psychologically important 0.78 handle. Alternatively, holding below 0.7750 – the resistance level seen through April – could push price back down to any of the key moving averages. 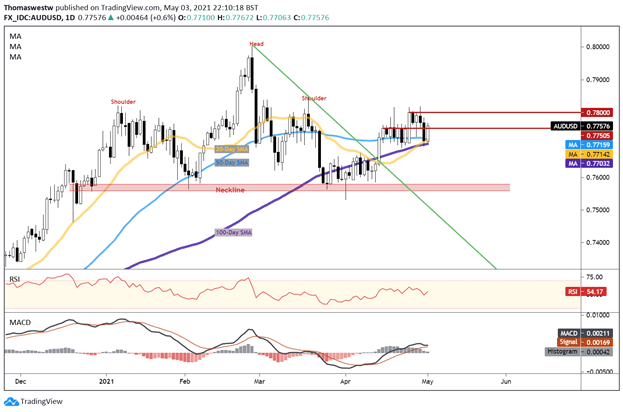