Asia-Pacific markets performed well overall on Thursday, but the same fortune may not extend into the close of the week after a downbeat session on Wall Street. Bloomberg reported that President Joe Biden is set to nearly double the capital gains tax rate to 39.6% for Americans earning over $1 million. Major US indexes fell, with tech stocks leading the way lower. The Nasdaq 100 index dropped 1.24%.

Elsewhere, the safe-haven US Dollar caught a bid, with the DXY index seeing a modest rise. In line with the overall theme of risk aversion, Treasuries caught a bid across the curve. The 10-year yield fell over 1%, while the 30-year sank just over 1.5%. The Biden administration is expected to release further details on the tax plan in the coming weeks.

A higher tax rate on investments in the future would likely encourage some investors to lock in gains, securing the current lower rate. While it is impossible to forecast just how big of an impact this could have -- especially considering the runup in US equities over the past few years – it will certainly be a headwind for markets, how much is unknown for now, however.

Hong Kong’s Hang Seng Index (HSI) closed 0.47% higher on Thursday, although futures look bleak before the open. The broad risk-off tone was witnessed in the Australian Dollar and New Zealand Dollar as well. Australia reported manufacturing PMI for April, which crossed the wires at 59.6. Japan will report inflation figures this morning, and then Thailand will follow later in the day with trade data for March.

The New Zealand Dollar’s post Descending Wedge breakout appears to be coming to a possible end, with the psychologically imposing 0.7200 level putting up a solid defense over the past few days. Now, NZD/USD is moving lower and may break below its 50-day Simple Moving Average (SMA), which could put more weight on the currency pair. If so, price may fall rapidly, perhaps to the 0.7000 mark. 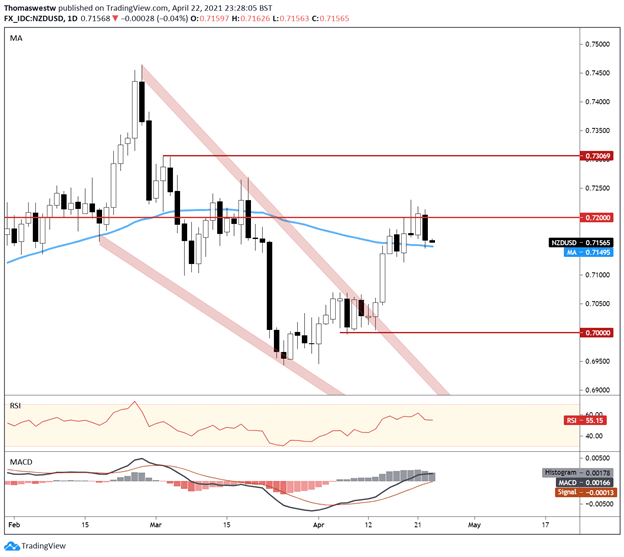