Asia-Pacific markets may see spillover from the strength seen on Wall Street. US equity markets bounced back on Wednesday, following two days of losses, with small-cap stocks leading the charge higher. The Russell 2000 index gained an impressive 2.35% on the close, while volatility pulled back, evidenced by a 6.32% drop in the VIX volatility index. Investors have been focusing their attention on earnings amid a rather light week on the economic calendar.

Earnings have been primarily positive, helping to buoy market sentiment as stocks trade around all-time highs. Bank earnings have been positive, bolstered by strong trading revenues and a better-than-expected economic reopening. Investors are now anxious for technology stocks to report next week, with several Wall Street darlings slated to report quarterly figures. Netflix, one of the first mega-cap tech stocks to report earnings, fell over 7% on Wednesday following a subscriber miss.

The Bank of Canada’s (BoC) interest rate decision saw the Loonie strengthen as the central bank announced a pullback in the amount of government debt it will purchase. The QE taper was expected by some but was far from a certainty, especially considering Canada’s recent spike in Covid cases. The decision marks a major step in easing the extremely supportive monetary policy in response to the global pandemic.

Today’s session will be void of any high-impact economic events, but Hong Kong and Taiwan will release unemployment data. Thailand is also slated to release trade data for March. The Australian Dollar was a winner against its major peers overnight, following a better-than-expected retail sales print. Upbeat sentiment on Wall Street appeared to play a bigger factor on the Aussie-Dollar’s rise, however.

The Australian Dollar faces fresh fundamental headwinds after an early Thursday decision by Foreign Minister Marise Payne nixed two Belt and Road Initiative related deals with China, according to a report from Reuters. The move will likely worsen Australia’s already strained relationship with China and may even bring a formal retaliatory action.

Despite the overnight move higher, AUD/USD bulls continue to struggle to decisively overcome the 0.7750 level, indicated by the red horizontal line on the chart below. The 50-day Simple Moving Average (SMA) appears to be providing firm support to the downside, however. Price may continue to range between these two levels. A break on either side could see follow-through given the pair’s multi-day consolidation. 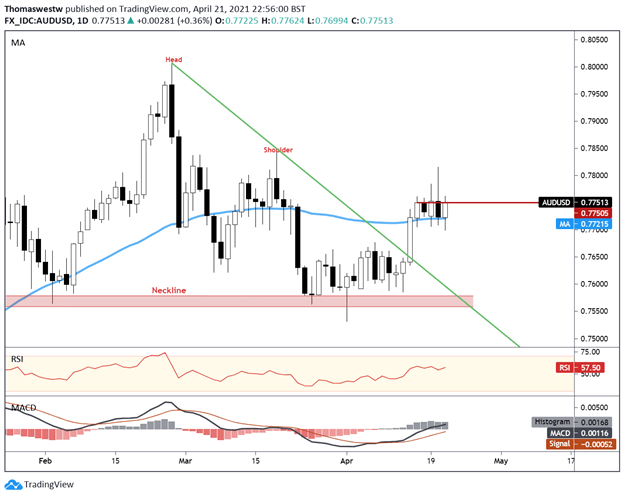