Asia-Pacific markets may be set to see some gyration across major indexes on Thursday following a downbeat session on Wall Street. Technology stocks led losses in the New York trading session, with the Nasdaq 100 index closing 1.31% in the red. Tech stocks sold off despite the highly anticipated Coinbase debut on the Nasdaq.

Coinbase shares fell to close at $328 from its opening price of $381 but still well above Tuesday night’s $250 reference price. Meanwhile, cryptocurrencies such as Bitcoin Cash and Dogecoin rocketed higher. Bitcoin fell into the afternoon but not before nearly hitting the 65k mark. The Dow Jones inched 0.16% higher while the small-cap Russell 2000 gained 0.84%.

Investors are preparing for Australia’s March employment report due out today at 01:30 GMT when analysts expect a +35k jobs figure to cross the wires and a percentage point drop in the unemployment rate to 5.7%. A better-than-expected print, whether it be in the headline figure, unemployment rate, or full-time jobs added, may bolster the recent strength seen in the Australian Dollar.

Later in the day, markets will digest Australian new home sales for March, foreign direct investment (FDI) out of China for March, and India’s March trade balance according to the DailyFX Economic Calendar. On the monetary policy front, the Bank of Korea (BOK) is expected to stand steady at 0.5% today when it announces its April interest rate decision. South Korea’s KOSPI index gained 0.42% on Wednesday.

Chinese equities rallied on Wednesday after a joint statement from major Chinese companies assuring their compliance with anti-monopoly rules in the country, according to China’s market regulator. The move follows a record fine on China’s tech darling Alibaba. Market participants are carefully monitoring liquidity conditions in China and Thursday’s cash injection from the PBOC may provide a clue into the government’s view on financial conditions as the world’s second-largest economy attempts to balance leverage concerns against the proper amount of liquidity.

Elsewhere, the US Dollar continued lower overnight, with the DXY index looking set to record its third consecutive daily loss. The New Zealand Dollar saw major gains after a dovish April OCR statement from the RBNZ. The Singapore Dollar received a boost following the Monetary Authority of Singapore (MAS) leaving its policy stance largely the same.

The Australian Dollar has broken trendline resistance from the late-February high, with a subsequent breach above the 100-day Simple Moving Average (SMA). The breakout followed a period of consolidation in the currency pair along the neckline of a Head and Shoulders pattern. The head of that pattern at 0.8007 may quickly come into focus if bullish momentum extends. Tonight’s jobs report may provide further direction. 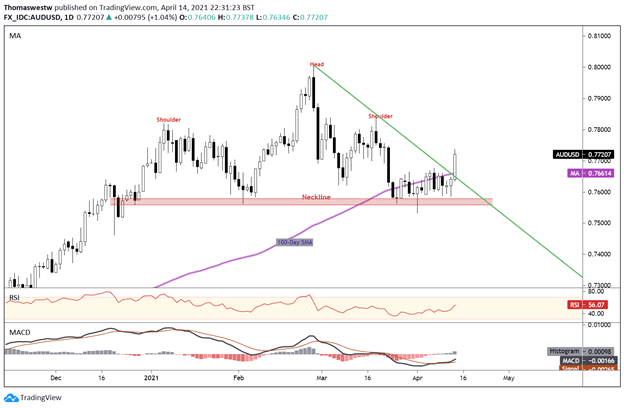