Investors are entering the week with eyes on US corporate earnings, slated to kick off the week with companies including Bank of American, JPMorgan Chase, Delta Air Lines, and UnitedHealth Group. Equity valuations are already considered stretched by many investors after the S&P 500’s 9.92% year-to-date run. Still, many anticipate higher highs for stocks amid record-breaking stimulus efforts, from both monetary and fiscal authorities.

The scale of global policy support has stoked concerns about inflation, despite the lack of pressure seen in official data prints thus far. This week will bring Marchprice growth data out of the United States. Core CPI – which excludes volatile components such as food and energy –is expected to cross the wires at 1.6% on-year.

While a tick higher in this month’s inflation data may be transitory – owing base effects reflecting the Covid-driven plunge 12 months ago – a higher-than-expected read may still push yields upward as markets speculate that the Fed will have to tighten earlier than anticipated. The disparity between a rise in market-based inflation expectations and the Federal Reserve’s outspoken dovish narrative has been a potent driver of volatility recently. Fed Chair Jerome Powell will give an interview on US television early Monday talking about the economy, which may inform the debate further.

China will release New Yuan Loans data, which will be closely watched to gauge the economic powerhouse’s ongoing stimulus efforts. Concern that China may be preparing to pull back on economic stimulus to avoid overheating the economy is brewing in Asia-Pacific markets. Hong Kong’s Hang Seng Index (HSI) dropped 0.83% last week.

Analysts expect 2.45 trillion Yuan ($374 billion) in new loans in March versus 1.36 trillion Yuan ($207 billion) in February, according to the DailyFX Economic Calendar. A lower figure may suggest a policy shift, which may pressure APAC equity indexes. China’s Q1 spending is on track to hit a record high if Monday’s expectations are met. 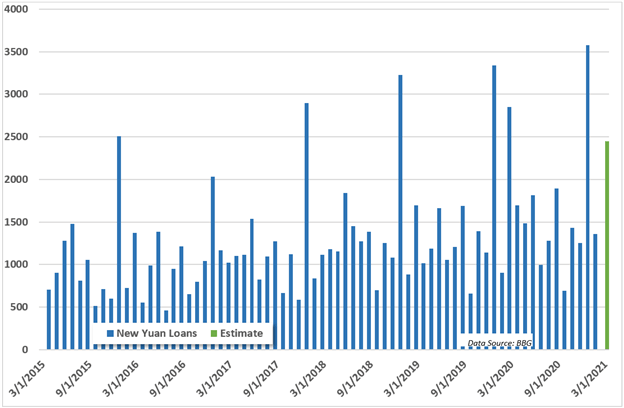 The Chinese Yuan has surrendered ground against the US Dollar since bouncing off a long-term trendline from 2014, giving back a portion of the gains it made through 2020. A supportive trendline from the February swing low has helped guide the USD/CNH exchange rate higher, with momentum appearing to shift as the 50-day Simple Moving Average (SMA) turns firmly upward. This barrier will be key for the currency pair to maintain a constructive trajectory. A break below it may open up further losses, with a retreat to the 50-day SMA perhaps in store thereafter. 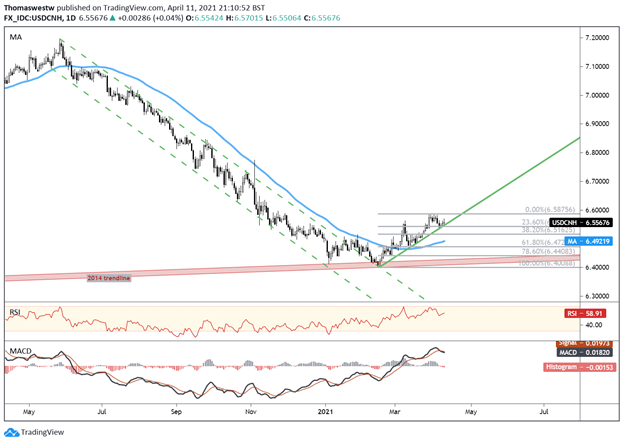