US traders returned from a long Easter holiday weekend, reinvigorated and ready to take on additional risk. The S&P 500 rose to a fresh record high extending gains from last week. Technology stocks saw heavy inflows, with the Nasdaq 100 Index climbing over 2% on the day. Small-cap stocks lagged, but the Russell 2000 index managed to climb 0.49%

Elsewhere, traders moved out of the Treasury market. Yields across the curve rose, reflecting the risk-on move in the New York trading session. The benchmark 10-year yield climbed 2.03% through the Wall Street closing bell. The safe-haven US Dollar saw selling against its major G10 peers. Despite the weaker USD, gold and silver failed to catch a bid, with traders favoring US equities.

The upbeat Wall Street session comes after a blow-out US jobs report, released last Friday when local markets were closed. 916k jobs were added in March in the United States versus expectations of 647k, according to the DailyFX Economic Calendar. Moreover, the March service-sector ISM survey released Monday morning printed its strongest figure since the Covid pandemic began, registering at 63.7 versus an estimated 59.0. 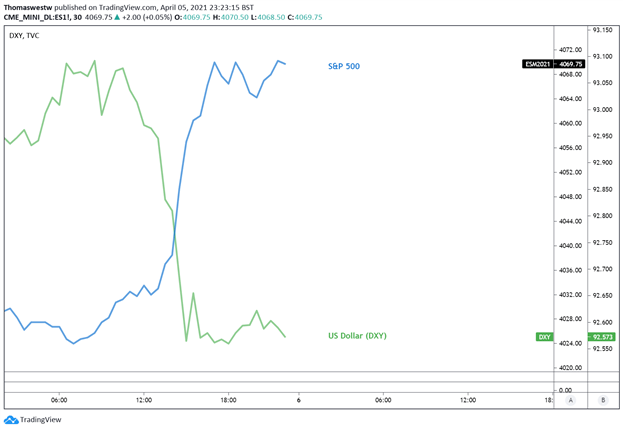 The Reserve Bank of Australia (RBA) will release its interest rate decision today. Analysts expect Australia’s central bank to hold rates steady at 0.1%. In fact, the meeting isn’t likely to be a major mover, with no major policy changes likely to be announced. Nonetheless, traders will be keeping a close eye on the event, as prudent investors should.

Later this week, China will release inflation data as well as the New Yuan Loans report for March. In the US, the Federal Reserve will release minutes from the latest Federal Open Market Committee (FOMC) meeting. Loretta Mester, President of the Cleveland Federal Reserve, urged the markets to remain cautious despite the blowout jobs report in remarks made Monday.

The New Zealand Dollar has recovered a portion of sharp losses against the US Dollar in March when some risk-aversion spurred USD buying. NZD/USD is now approaching its 20-day Simple Moving Average. A trendline from the February swing high may also impose some resistance. However, a bullish signal from the MACD was generated, with a cross above its signal line this week, which may speak to more upside potential in the pair. 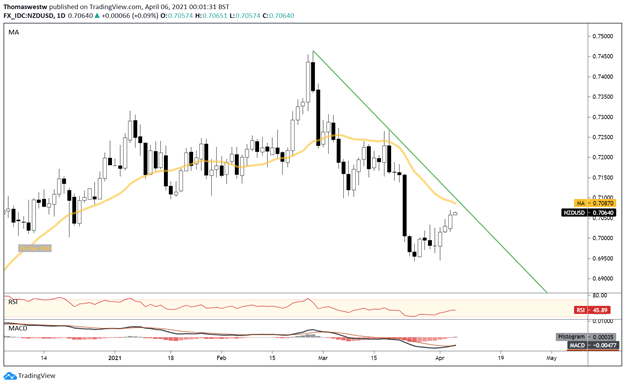