US stock indexes moved mostly lower on Tuesday, with the Nasdaq 100, S&P 500, and Dow Jones Industrial Average (DJIA) dropping 0.53%, 0.32% and 0.31%, respectively. The Small-cap Russell 2000 managed to move higher by 1.72% after the index saw sharp losses on Monday. The VIX, or commonly referred to as Wall Street’s “fear gauge”, still managed to drop below the 20 handle, while Treasuries on the longer end of the curve moved higher.

Elsewhere, the US Dollar gained against most major FX peers, with the DXY index climbing above the 93 handle, its highest level since early November 2020. Crude and Brent oil prices moved lower. The Suez Canal was cleared early this week, but there remains a large number of ships waiting to pass through.

Wall Street may see some heightened volatility during Wednesday’s session as the quarter ends, as well as a speech from President Joe Biden when he is expected to outline his administration’s recovery plan. Markets were uninspired by an impressive consumer confidence report this morning, but investors may be waiting to hear details around the next round of US stimulus before taking on more risk in markets. 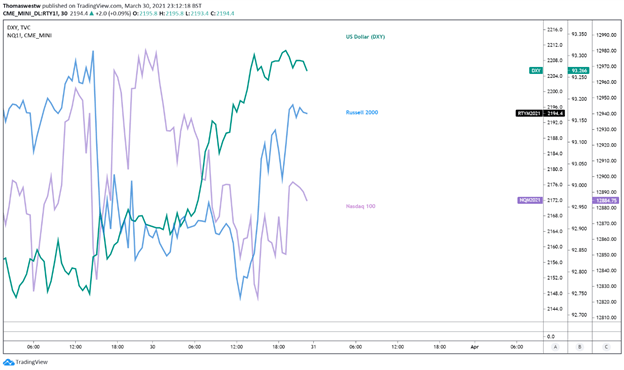 Japan will release industrial production data early in the session, according to the DailyFX Economic Calendar. Australia will follow with preliminary building permits data for February, with the consensus forecast standing at 5%, up sharply from the prior month’s -19.4% print. The focus will likely be China’s manufacturing PMI for March, due out at 01:00 GMT time. Analysts are expecting the figure to cross the wires at 51 versus 50.6 in February.

A better-than-expected print from China may inject some upbeat sentiment across markets, particularly industrial commodities like copper and iron ore. In turn, that could underpin the Australian Dollar – a major exporter of metals to China. AUD/USD has come under pressure in recent weeks on US Dollar strength. On the other hand, a missed print could see a ripple of risk aversion in markets.

The neckline of a Head and Shoulders pattern remains in play looking at AUD/USD, but prices appear to be dangerously close to breaking lower. The neckline, which aligns closely with the 0.7600 psychological level, will need to hold for bulls to retain hope of preserving the broader trend higher. Otherwise, a break would confirm exhaustion of that trend and likely send prices sharply lower as bulls capitulate.

A drop to the 0.75 handle near a December level of support at 0.7517 may be on the cards for the currency pair. Moreover, the MACD oscillator is bearishly positioned and RSI is also trending lower. Alternatively, retaking the recently surrendered 100-day SMA could help reinvigorate some bullish energy. The worst-case scenario, however, would be a drop to the 200-day SMA, which sits below the 0.7400 mark. 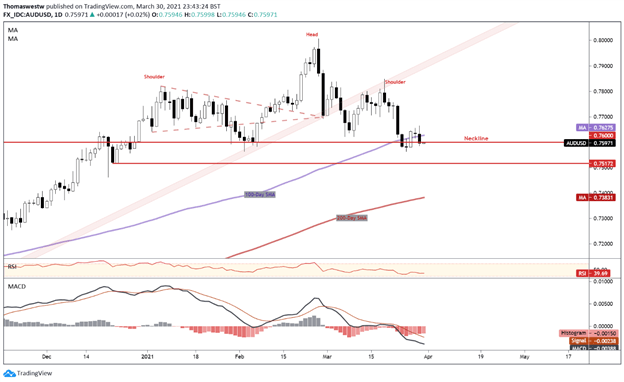