US stock markets ended mixed on Monday after investors spent the weekend mulling over implications to the financial system from a series of large block trades that tanked ViacomCBS and Discovery shares on Friday. Sunday night revealed Archegos Capital Management, run by Bill Hwang, was behind the massive sell orders. Credit Suisse, believed to have large exposure to the trades, fell more than 10% in Monday trading.

The US-based family office’s blowup is sending shockwaves through the financial world and already has many calling for increased regulatory scrutiny after witnessing the cascading effects brought on by Mr. Hwang’s massive margin calls. A question many are asking is: how did a fund gain this amount of exposure to the market with such a high degree of leverage yet remain under the radar? Investment professionals and lawmakers alike will likely delve into that question in the coming weeks and months. 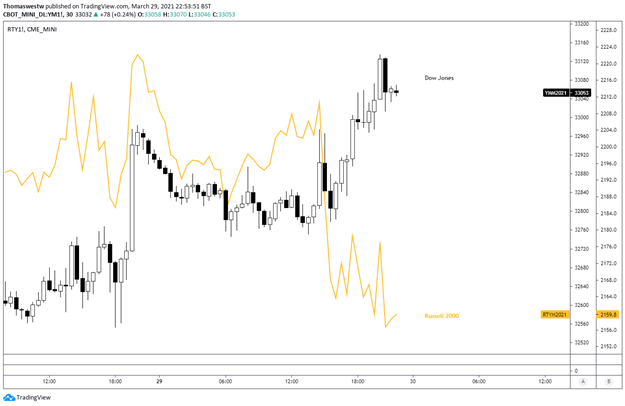 Oil ministers are set to meet later this week to decide on the cartel’s supply policy for May. Despite a robust pickup seen on the demand side, particularly in the United States as the country’s vaccine rollout continues at breakneck speeds, lingering concerns over the fragility of the global economy are likely to keep output cuts in place.

Europe is one area of concern for oil ministers, where vaccine rollouts are hitting road bump after road bump. Now, political implications are afoot, after a spat between the 27-member bloc and the United Kingdom has injected calls for the EU to restrict supply chains, a move which could bring retaliatory measures and potentially cripple its ability to produce vaccines for its own populace.

Early Tuesday, Reuters reported that Saudi Arabia is ready to extend its own voluntary oil cuts in a show of support to OPEC and its members to extend production cuts out until May and June. The news pushed oil prices higher across the US and UK benchmarks and will likely be supportive to oil-linked currencies such as the Canadian Dollar and Norwegian Krone.

The OPEC+ news pushed crude oil prices above a descending trendline from the March high. The trendline break signals a bullish move in price action, however, prices remain nearly 9% lower from earlier in the month. MACD is picking back up on the daily chart after nearly avoiding a bearish cross below its center line. 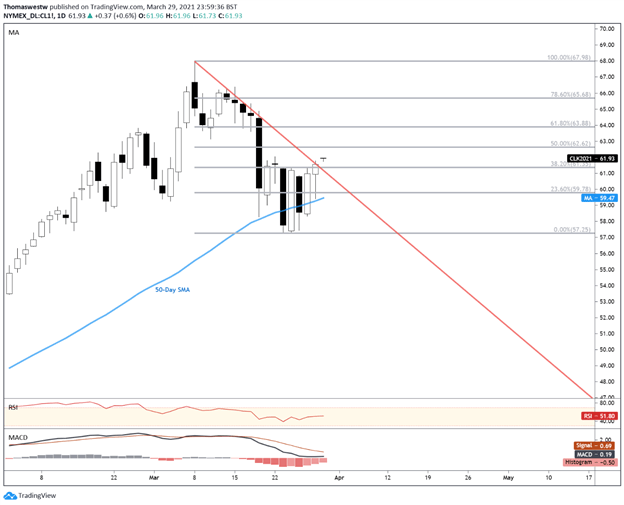