US equity indexes pulled back on Tuesday after Monday’s sharp move higher, signaling that Wall Street may have gotten a little ahead of itself earlier this week. The S&P 500 lost 0.81% while the Dow Jones Industrial Average moved 0.63% lower. Technology and small-cap stocks were the biggest losers, however, with the Nasdaq Composite and Russell 2000 losing 1.69% and 1.93%, respectively.

Elsewhere, the DXY index is seeing its recent momentum fade as the US Dollar weakened against its major peers. Closely-watched Treasury yields also continued to move lower after the 10-year rate eclipsed 1.50% last week, its highest mark since the pandemic began. The bond markets’ recovery wasn’t enough to inspire confidence in equities, however.

The volatility in Treasuries has caught investors off guard after months of enthusiasm amid the backdrop of a strong economic recovery. Now, central bankers are also expressing unease. In a speech to the Council on Foreign Relations, Federal Reserve Governor Lael Brainard expressed concern Tuesday stating “ I am paying close attention to market developments.” 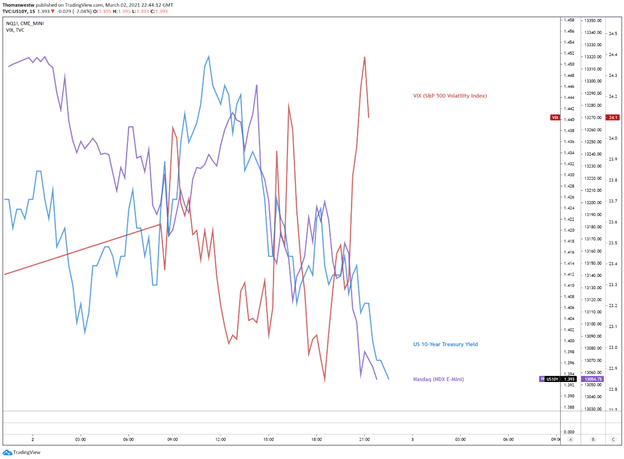 Speaking of the Aussie-Dollar, Australia is set to release gross domestic product figures for the fourth quarter. According to the DailyFX Economic Calendar, GDP growth on a quarterly basis is expected to cross the wires at 2.5%. While this represents a move lower from the prior quarter, economists remain impressed with the resiliency seen in the Australian economy.

The commodity-linked Canadian Dollar took advantage of the USD weakness despite a drop in crude oil prices, with USD/CAD moving 0.10% lower. A more significant drop in oil prices may spill over into CAD, however. Tomorrow may give some direction to price from the weekly EIA report when the US agency will release inventory figures on petroleum products.

The Canadian Dollar has been performing well against the US Dollar this month, so far. USD/CAD is approaching its 12-day Exponential Moving Average after a move lower saw support at the 38.2% Fibonacci retracement from the January to February move. The Relative Strength Index (RSI) is neutrally positioned, but the MACD indicator is breaking lower towards its centerline, indicating a possible pickup in downward momentum. 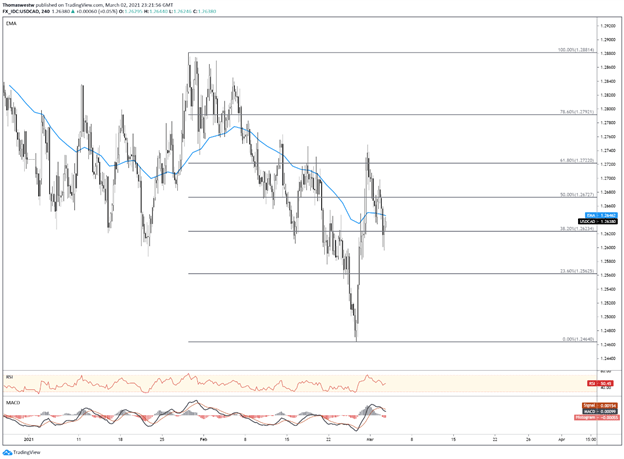