US equity indexes rebounded on Monday as Wall Street began the new month of trading with a restored sense of optimism. The New York session saw a broad-based appetite for risk reemerge after last week’s selloff when climbing Treasury yields spooked investors and pushed major US indexes near correction territory.

The S&P 500 and Dow Jones Industrial Average closed 2.38% and 1.95% higher, respectively. Technology stocks and small-caps were the leaders, however, with the Nasdaq Composite posting an impressive 3.01% gain, bolstered by Tesla’s 6.36% climb. The Russell 2000 closed 3.37% higher as the VIX “fear gauge” lost nearly 17%.

Monday’s upbeat mood began with a better-than-expected report on the US manufacturing sector from the Institute of Supply Management. Analysts were expecting the ISM report for February to cross the wires at 58.8. 60.8 – which represents the strongest read since the pandemic started – was the actual outcome. 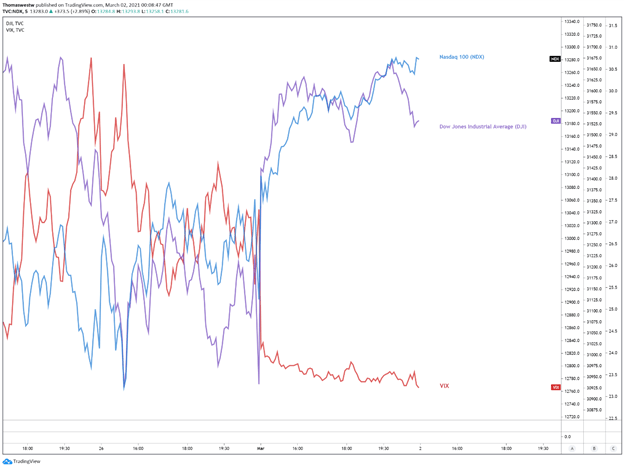 Investors are brushing off the selloff seen across government bonds after rising Treasury yields spooked investors last week as the US 10-year yield rose to meet the S&P 500’s dividend yield. The 10-year note’s yield continued higher during the Monday US session, but the pace appeared to moderate, signaling a possible lull in bond selling.

Earlier in the week traders brushed off sluggish Chinese manufacturing data and instead focused on improving economic data out of Australia. Home loans rose to 10.9% for January on a month-over-month basis versus 8.7% in December. Moreover, the Ai Group Manufacturing Index crossed the wires at 58.8 for February, a 3.5% gain from the prior month.

Today, all eyes will be on the Reserve Bank of Australia with the central bank slated to release its second interest rate decision of the year. Investors are forecasting Australia’s key benchmark rate to remain steady at 0.10%, according to the DailyFX Economic Calendar. The rate decision follows a move earlier this week when the bank announced over $3 billion in purchases of longer-dated bonds as policymakers attempt to combat bets on inflation.

The Nasdaq 100 index gained 2.89% on Monday as the index pushed back above its 23.6% Fibonacci retracement level from the September to February move. The MACD indicator appears to be picking back up after the move and is on track to make a bullish cross back above its center line. Moreover, the 50-day Simple Moving Average was overtaken today and bulls will likely aim to hold that key moving average for another push higher. 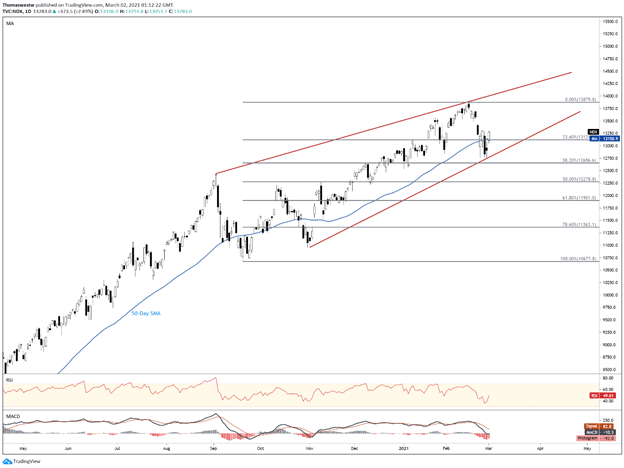 The Russell 2000 appears primed to continue its broad trend higher as the index test the upper limit of a Descending Triangle pattern after bouncing off support and the 26-day Exponential Moving Average. Moreover, the MACD oscillator made a bullish cross above its centerline, indicating upward momentum may continue. 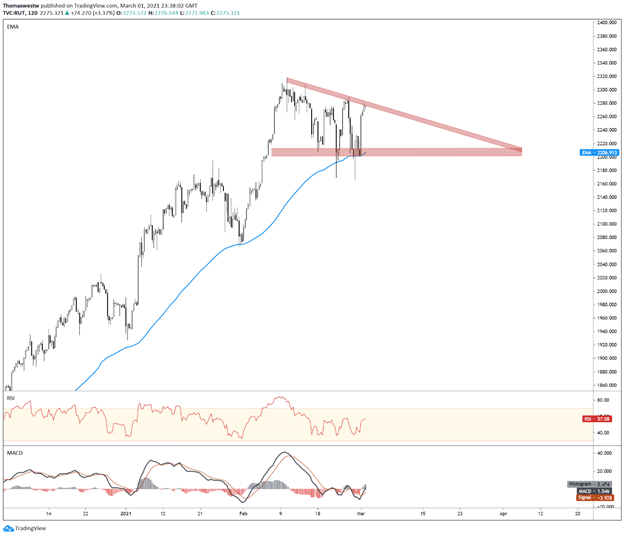