US equity indexes moved higher on Wednesday as Wall Street was encouraged by testimony from Federal Reserve Chair Jerome Powell who ensured markets that the Fed will remain in an accommodative stance for some time. The Russell 2000 gained 2.38% while the Dow Jones Industrial Average pushed 1.35% into a fresh record high. The S&P 500 and Nasdaq Composite moved higher by 1.14% and 0.99%, respectively.

Elsewhere, US government bond yields moved higher with the 10-year Treasury rate climbing to a high of 1.44%, as the reflation theme continued to grip markets. The DXY index gyrated near the 90 handle but gold prices failed to find a bid despite a lackluster USD. Silver, on the other hand, managed to gain nearly 1% versus the Greenback.

US markets will focus on durable goods orders for January and labor market data tomorrow. Investors have been keenly eyeing weekly initial jobless claims data, with 838k expected for the week ending February 20, according to the DailyFX Economic Calendar. A better-than-expected print on either report may help bolster equity prices. Moreover, several Federal Reserve members, including New York Fed President John Williams, are slated to speak. 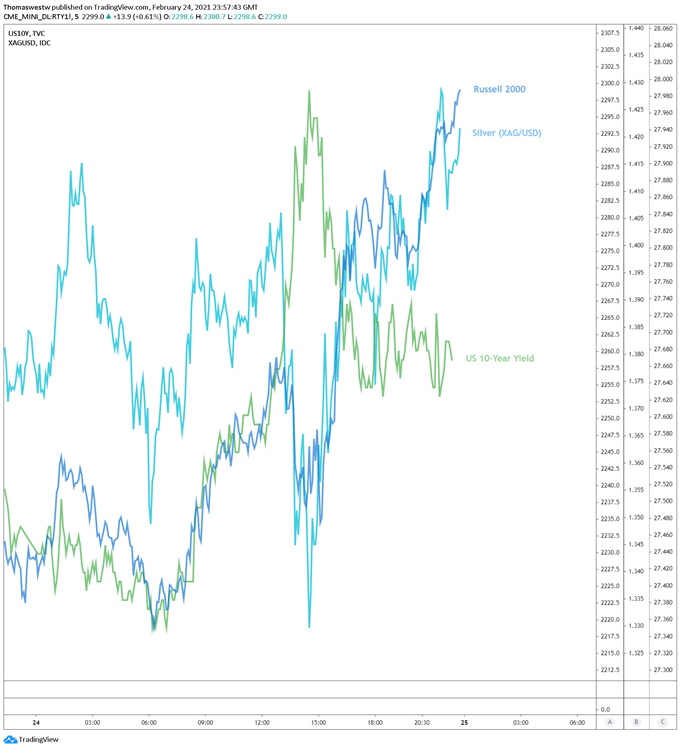 The economic calendar for today’s session is rather sparse but Japan will release final figures on its coincident and leading economic indexes, forecasted to cross the wires at 87.8 and 94.9, respectively. However, the anti-risk Japanese Yen may remain glued to market sentiment. Hong Kong will also release trade data on exports and imports for January.

News out of New Zealand earlier this morning regarding the RBNZ has caused significant volatility across most Kiwi pairs. In a prepared statement, New Zealand Finance Minister Grant Robertson announced changes to the RBNZ’s remit to include housing prices when considering monetary and other financial policy decisions. Home prices in the island country have been of increasing concern since the Covid-induced low rate policy was introduced last year, which has sent housing costs soaring (as shown in the chart below). 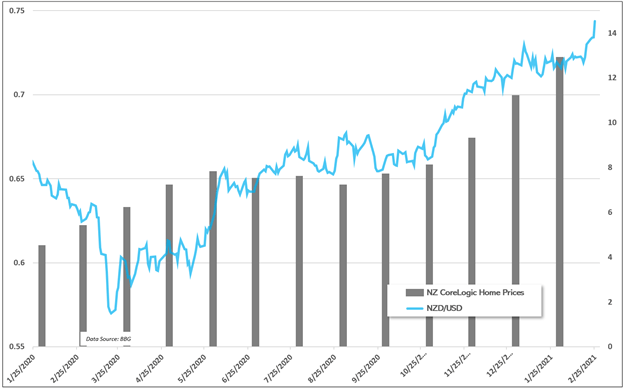 The Australian Dollar has seen a broad-based influx of strength on the global reflation theme. AUD/USD tore above 0.7900 earlier this week and is now tracking towards the .80 handle. The 161.8% Fibonacci extension from the January-February move will offer possible resistance shortly before testing the psychologically imposing 0.8000 level.

A short-term pullback may be in order before doing so, however, with the Relative Strength Index (RSI) starting to trend lower in overbought territory. The aforementioned 0.79 level may offer an area of support on any down move, but the bull trend appears to be in full swing and any lulls will likely be short lived. 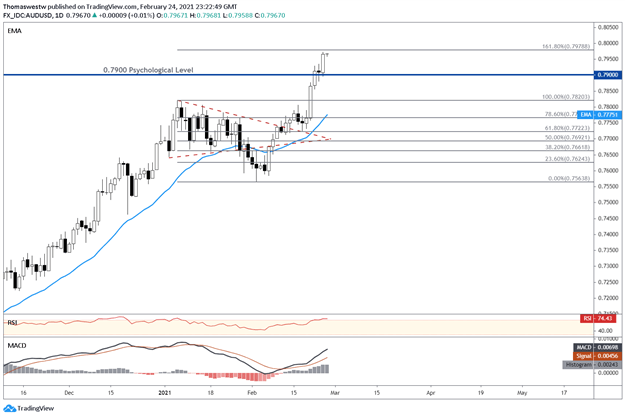 The New Zealand Dollar – bolstered by this morning’s news – managed to overcome the Aussie-Dollar’s broad-based strength. AUD/NZD lost 0.60% on Wednesday and the pair looks set to move lower in the near-term, with the MACD line nearing in on a cross below its signal line. 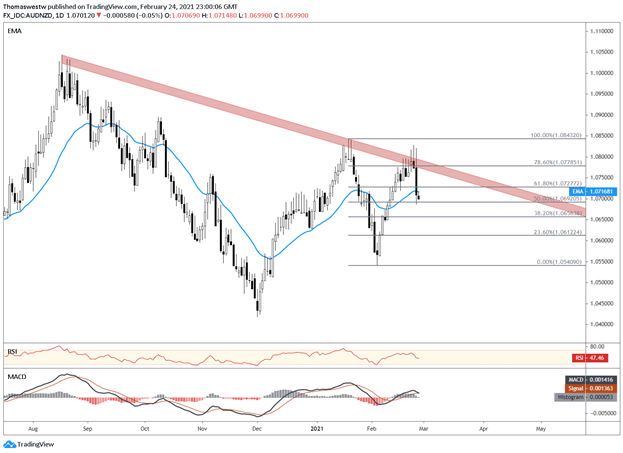