Wall Street saw red across the board on Thursday as the economic recovery picture took a hit following a worse-than-expected US initial jobless claims figure crossed the wires at 861k for the week ending February 13. Analysts were expecting 765k. Continuing claims also missed expectations at 4494k. The small-cap Russell 2000 index dropped 1.67%, followed by the Nasdaq Composite, S&P 500, and Dow Jones at -0.72%, -0.44%, and -0.38%, respectively.

The US 10-year Treasury yield climbed back near its recent multi-month high from earlier this week, with the current level just below 1.300%. Meanwhile, the US Dollar weakened with the DXY index falling nearly half a percentage point. The softer USD didn’t help gold and silver prices, however. XAU/USD was barely changed as it hovered near multi-month support. Silver prices fell against the Greenback, with XAG/USD dropping 1.29%

Elsewhere, lawmakers on Capitol Hill continued to move forward with finalizing President Joe Biden’s $1.9 trillion stimulus relief package, which is expected to advance through Congress by the end of this month. Talks over a separate infrastructure bill are also now on the radar after President Biden met with labor union leaders earlier this week.

The need for a stimulus bill has also gained steam following the failure of the Texas’s power grid after a massive storm system caused chaos across the United States earlier this week. Nearly half a million customers in the Lone Star State are reportedly without power still. There was testimony on Capitol Hill over the recent GameStop market blunder. 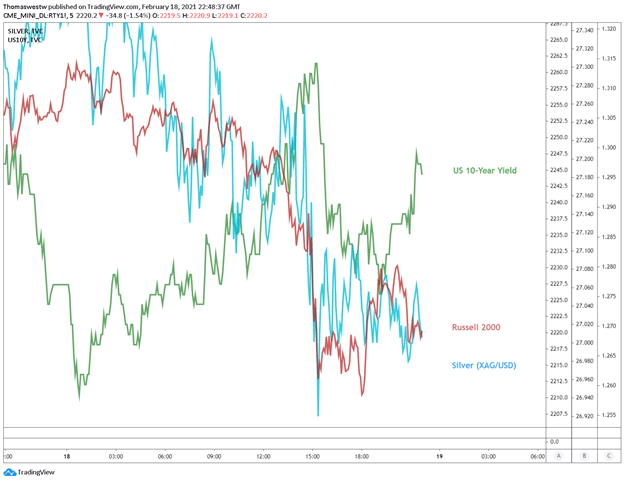 The rise seen in Treasury yields may pressure equity prices as higher rates attract more risk-averse investors away from stocks. Debate over a correction in equities is moving into the forefront of market discussions as of late, which now appears more likely given the multi-month highs seen in long-dated US government bond yields.

Risk-sensitive currencies such as the Aussie-Dollar and New Zealand Dollar are on the move higher, bolstered by the broad weakness seen in the Greenback. The Australian Dollar received a slight sentiment boost from a better-than-expected jobs report earlier this week. The Kiwi is also trending higher on USD weakness. According to the DailyFX Economic Calendar, Australian retail sales will cross the wires today, with analysts expecting a 2.0% m/m print.

The New Zealand Dollar may be set to extend higher from its current level against the US Dollar in the coming days. However, overhead resistance from a descending trendline off the January highs may test any move higher. To the downside, the 50-day Simple Moving Average – which offered support earlier this week – is a likely area of support. Moreover, the MACD oscillator appears to be on the verge of making a bullish cross above its center line. 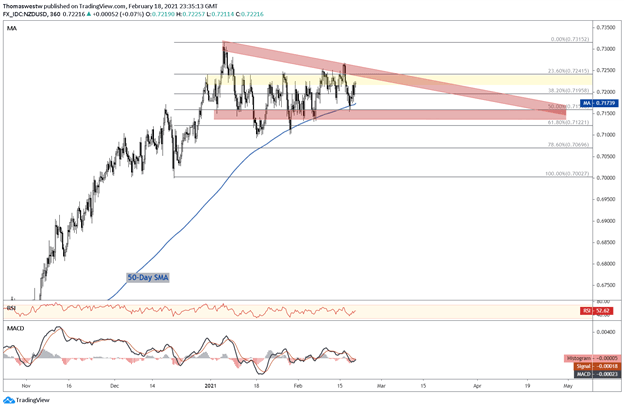