Wall Street saw another upbeat trading session as all four major equity indexes closed over 1% higher. The Dow Jones Industrial Average was the biggest winner with a 1.57% gain. The S&P 500, Nasdaq Composite, and Russell 2000 recorded gains of 1.39%, 1.56% and 1.19%, respectively. After the closing bell, Amazon and Alphabet reported impressive quarterly earnings that sent both stocks higher in after-hours trading.

Meanwhile, silver fell over 8% after a Reddit-fueled trading frenzy pushed the precious metal to fresh multi-year highs on Monday. The volatility caused the CME to raise its margin limits on silver futures contracts, a move that likely contributed to today’s decline. Oil prices gained after an API report showed an unexpected draw in crude oil inventories for the week ending January 29.

Treasury yields and the US Dollar climbed higher, prompted by increased stimulus bets as Democrats in Congress prepared to move forward on President Joe Biden’s $1.9 trillion relief agenda despite GOP opposition. Mr. Biden may choose to compromise on a smaller package in return for increased Republican support, which would help the bill’s chances on Capitol Hill and fulfill the president’s pledge to seek compromise. 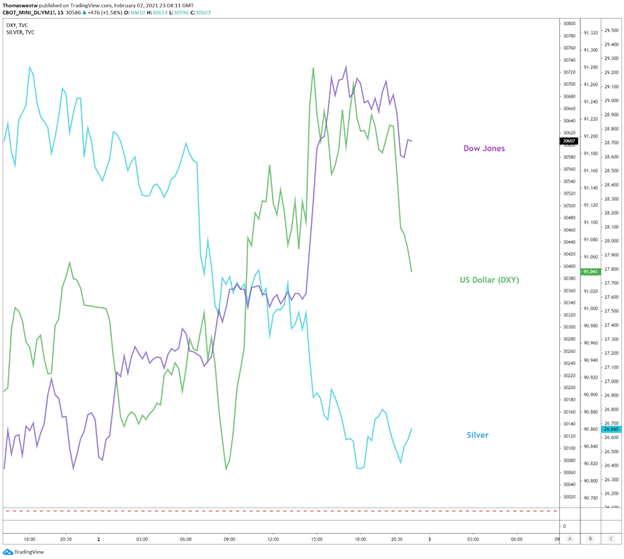 The New Zealand Dollar is also extending higher versus most of its major peers after a better-than-expected jobs report bolstered Kiwi sentiment. According to the DailyFX Economic Calendar, New Zealand’s Q4 employment change rose 0.6% on a quarterly basis against a 0.0% forecast. The stellar jobs report pushed unemployment to 4.9% from 5.3% in the previous quarter.

Kiwi strength pushed AUD/NZD below its 61.8% Fibonacci retracement from the December – January move. The Relative Strength Index is nearing oversold levels as it approaches the oscillator’s 30 level. AUD/NZD’s MACD is also trending lower in bearish territory, currently at the most extreme level since March 2020. The 78.6% Fibonacci level may provide a level of support, but prices could reverse at a near-term area of price inflection if bullish Kiwi sentiment cools sooner. 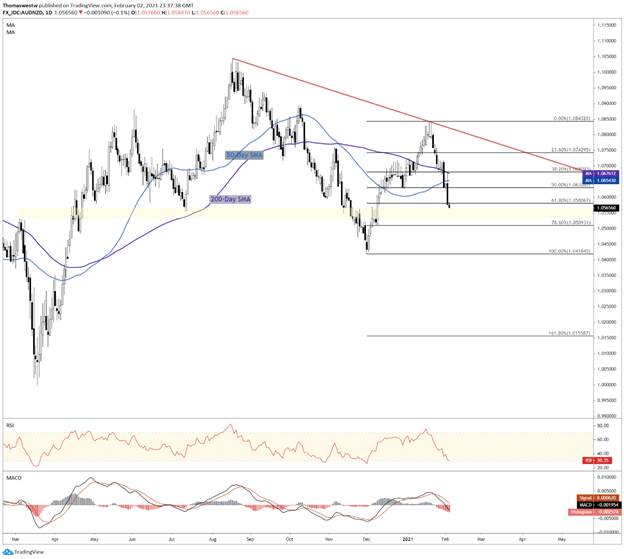