US equity markets surged higher on Thursday as traders piled into stocks following Wednesday’s sharp selloff that saw the Dow Jones Industrial Average drop over 2%, its worst performance since October. The Dow went on to climb 0.99% on Thursday. The S&P 500 and Nasdaq Composite also closed higher, gaining 0.98% and 0.50%, respectively. The Russell 2000 small-cap index was the laggard, dropping 0.10%.

Meanwhile, the US Dollar fell as upbeat market sentiment encouraged capital flows to move into risk-on assets. Accordingly, Treasury yields moved higher, with the 10-year rate gaining 25 basis points. Investors were likely encouraged by a better-than-expected US jobless claims figure that crossed the wires at 847k for the week ending January 23, down from the prior week’s 914k figure.

Markets also keyed in on the US Q4 advance GDP print, which showed a 4.0% growth rate on a quarterly basis, in line with expectations. While much slower than Q3’s 33.4% growth rate, Commerce Department data showed housing and non-residential investment remained strong. However, consumer-driven growth cooled, with core personal consumption expenditures dropping to 1.4% from the 3.4% Q3 read. 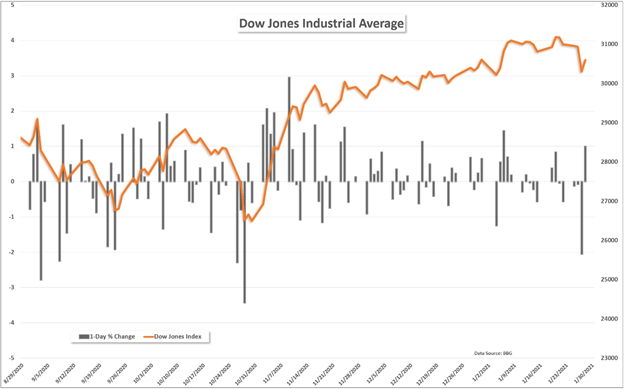 Recent actions from Chinese policymakers have investors concerned that the Chinese government may be attempting to curtail climbing valuations in asset prices. The People’s Bank of China performed several liquidity drains through open market operations that saw short-term cash rates climb to multi-year highs. The moves hint that Chinese officials may believe that asset prices have outrun proper valuations, which possibly opens the door to further tightening measures.

Friday’s economic calendar has Japanese consumer confidence and housing starts. Hong Kong’s Q4 advance GDP read is also on tap, according to the DailyFX Economic Calendar. A better-than-expected figure out of Hong Kong may fuel upward movement into the closing hours of the trading week. In line with current sentiment, risk-on currencies like the Australian Dollar are advancing higher against the US Dollar and Japanese Yen.

Despite the recent move higher, AUD/JPY’s 20-day Simple Moving Average appears to be providing resistance. A loosely formed Descending Triangle has also taken shape over the past few weeks, which could signal a reversal pattern given its preceding trend. That said, the Triangle’s upper trendline may turn prices away if AUD/JPY breaks above its 20-day SMA. A break below the lower trendline could give way to a possible selloff, however. 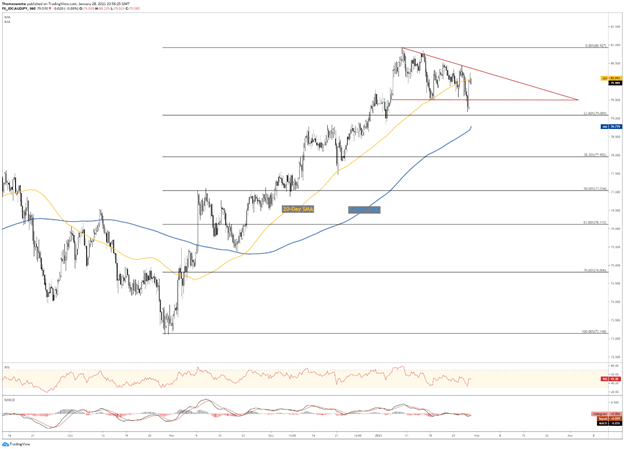 AUD/NZD was turned away by its 200-day Simple Moving Average after prices pivoted higher from the 38.2% Fibonacci retracement from the December – January move. However, the Relative Strength Index and MACD oscillators point to limited upside. A move below the 38.2% Fib may give way to a larger selloff, perhaps to the 61.8% Fib, or lower. 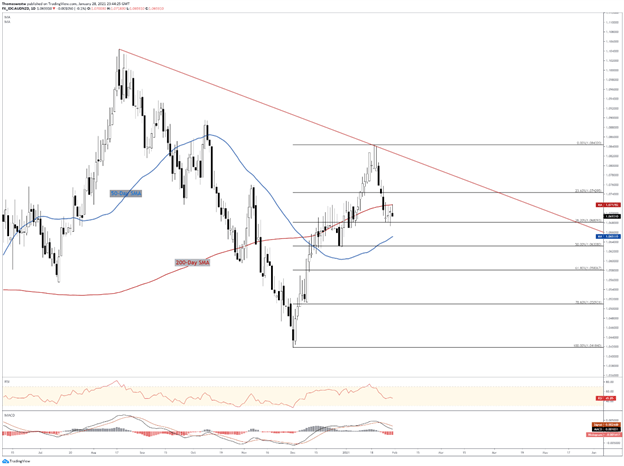