The US Dollar rose in the wake of December’s labor market report on Friday. While the headline payrolls print disappointed, showing the economy shed 140,000 jobs last month instead of adding 71,000 as projected by economists, wage inflation unexpectedly spiked to a seven-month high of 5.1 percent on-year.

Tellingly, the markets responded to the release with what seemed like a shift away from dovish extremes on Fed policy expectations. The slope of the US Treasury yield curve (10y-2y) steepened alongside the spread between the benchmark US 10 year yield and an average of major alternatives. Gold prices sank.

Traders may have reasoned that incoming fiscal stimulus will underpin employment – making December’s payrolls print somewhat dated – while price growth might only accelerate further. This could more definitively bury the prospects for additional monetary accommodation, at least in the near term. 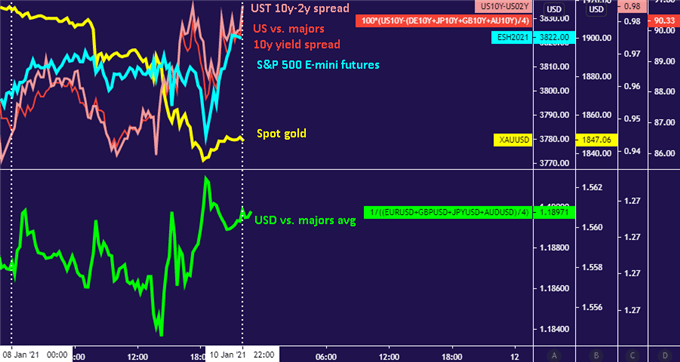 Wall Street struggled against this backdrop but shares roared higher into the close as President-elect Biden pledged to lay out plans for another fiscal stimulus boost Thursday this week. Upbeat comments from Fed Vice Chair Clarida talking up scope for recovery in 2021 probably helped as well.

That burst of optimism does not appear to be carrying over into early Asia-Pacific trade as markets return from the weekend. Bellwether S&P 500 futures are pointing lower and Australia’s ASX 200 has started the day on the defensive. Rising yields may well be the culprit. Japan is closed for a holiday.

December’s Chinese CPI data headlines a barebones economic calendar. The on-year inflation rate is seen registering flat (0.0%), marking a cautious recovery from November’s -0.5% contraction. Recent price growth readings have tended to surprise to the downside, warning more of the same may be ahead.

Markets might cheer a lower-than-expected CPI print if it materializes, moderating risk-off pressure. Investors may reckon that such a result gives the PBOC more room to expand its own stimulus efforts, particularly as financial conditions in the world’s number-two economy appear somewhat restrictive.