Small cap stocks led the U.S. trading session higher in Wednesday’s Wall Street session with the Russell 2000 index climbing 1.05% as the US Dollar extended an overnight slide. The S&P 500 and Dow Jones Industrial Average ended higher by 0.13% and 0.24%, respectively. Tech stocks lagged the broader market, but the Nasdaq 100 index still managed to close out the day with a 0.01% gain.

The upbeat mood is likely an extension of sentiment over the recently passed U.S. Covid relief bill that includes $600 direct payments to eligible Americans. These funds were set to begin disbursing as early as yesterday evening, according to the Treasury Department. The agency also said paper checks are already being sent out, and direct deposits will continue into next week.

That said, prospects for increased stimulus checks of $2,000 appear to be fading despite supportive calls from President Donald Trump after Senate Majority Leader Mitch McConnell stated that “no realistic path” exists for a standalone bill. Instead, Senate Republicans appear focused on moving one forward that also contain provisions over election security and a repeal of Section 230, which has little chance of making it to the President’s desk with the Democrat-controlled House. 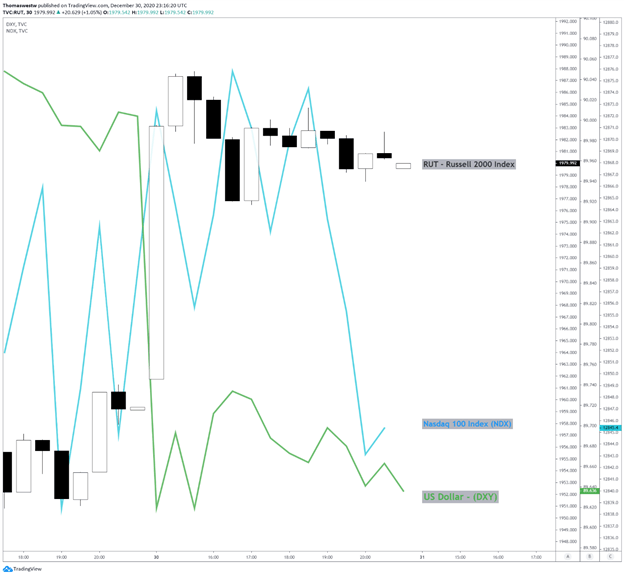 Asia Pacific stocks look set for a lackluster light volume trading session for Thursday with Japanese and South Korean markets closed for the New Year’s holiday. A recent development for markets crossed the wires earlier after the U.K. Parliament approved the EU-UK trade deal. That was largely expected, however, leaving markets unimpressed.

Despite the thinly traded tape across markets, traders will key in on Chinese PMI figures set to cross the wires Thursday morning. According to the DailyFX Economic Calendar, analysts are forecasting a 52.0 print for NBS Manufacturing PMI, a slight decrease from November’s 52.1 figure. Non-manufacturing PMI will also cross the wires with the prints offering some possible movement across markets.

Meanwhile, the spread of a new more contagious variant of Covid-19 is being watched by health experts in the United States as fears swirl over the possible effects on an already stressed U.S. healthcare system. The number of hospitalizations in the U.S. continues to rise and the country’s vaccine distribution plan appears to be off to a slow start with just over 2 million Americans receiving a Covid vaccine against the Trump Administration’s goal of 20 million by year-end.

Despite the thinly traded tape across equities and Covid-19 concerns, the risk-sensitive New Zealand Dollar pushed higher into fresh multi-year highs versus the ailing Greenback. The path higher appears likely to continue into 2021 with NZD/USD’s breach above the psychologically important 0.7200 level signaling a decisive bullish victory.

Moreover, the MACD oscillator crossed over its signal line, a bullish sign that indicates increased momentum. The Relative Strength Index (RSI) is moving higher, although the oscillator still sits under the 70 overbought level. Expansion in the Bollinger Band indicator is also giving way to price action breaking above its upper band, signaling strong upside momentum. The aforementioned 0.7200 level will also likely underpin any moves to the downside. 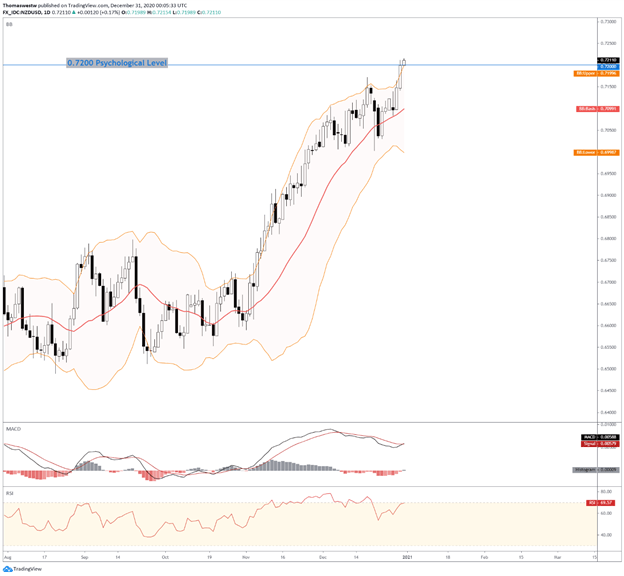