Wall Street saw a mixed trading session on Wednesday after some concerning economic data revealed a drop in U.S. personal spending. Data from the Commerce Department, released early Wednesday, showed a 0.4% MoM drop in personal spending for November, and a 1.1% drop in personal income, according to the DailyFX Economic Calendar. The Dow Jones and S&P 500 rose 0.38% and 0.07%, respectively. The tech-heavy Nasdaq Composite fell 0.29%. Gold and silver prices moved higher on US Dollar weakness.

Initial jobless claims crossed the wires Wednesday morning at 803k, beating expectations of 885k, and down from 892k in the previous week. U.S. durable goods orders also crossed the wires with a 0.9% seasonally adjusted gain for November, its seventh consecutive monthly increase, according to the Commerce Department. Still, the drop in consumer spending appears to have investors slightly on edge going into the trading holiday with gold rising above the 1870 handle.

Still, Treasury yields moved higher during New York trading hours despite mixed economic data. Investors also largely brushed off President Trump’s last-minute threat to the US$900 billion Covid relief bill. He asked Congress to amend the package, opening the door to a veto or not signing at all, with a government shutdown just days away. More recently, Trump vetoed the $740 billion defense spending bill. The recent actions out of the executive branch have left lawmakers scrambling in the wake of Trump’s unexpected actions. 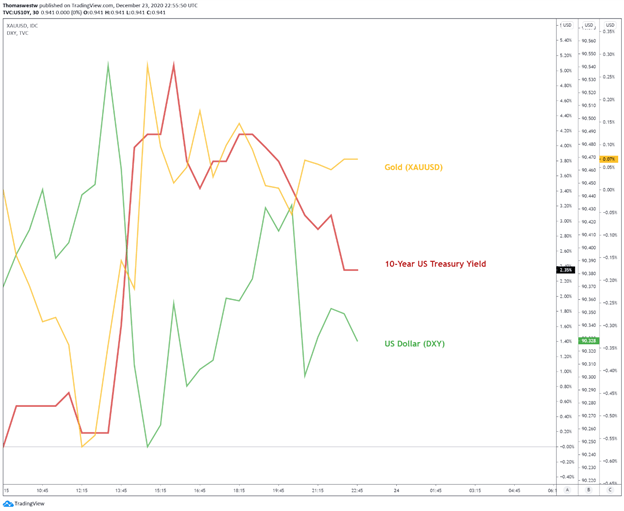 Despite mixed trading on Wall Street, the Asia Pacific session may benefit from a long-awaited Brexit deal moving into focus. According to EU officials, the UK and EU are on the cusp of ending a four year negotiation process after UK Prime Minister Boris Johnson reportedly conceded over the long-standing fisheries issue. GBP/USD pivoted higher as the news crossed the wires.

The rest of the week appears likely to be quiet outside of further Brexit developments with the Christmas holiday seeing many markets closed across the globe. Japan will release retail sales and labor market data later this week, but traders will be left with only Brexit and the U.S. political situation as many government agencies shut down for the holiday season.

Meanwhile, the Australian Dollar is aiming to re-establish its position above a recently surrendered trendline versus the US Dollar. AUD/USD is currently trading higher, but intraday action on Wednesday saw a rejection at resistance. The 0.7500 psychological level, along with the 23.6% Fib retracement (0.7486) will look to offer support if bears drag prices lower. To the upside, the 0.7600 level and the aforementioned trendline will likely stand as resistance. 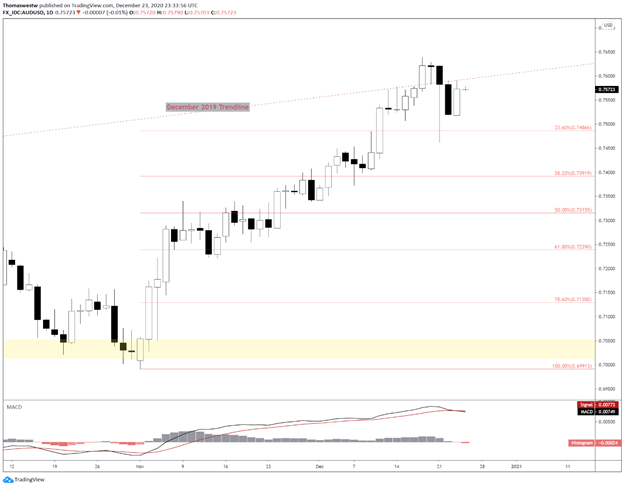 The Australian Dollar offers an interesting technical structure against the New Zealand Dollar. AUD/NZD is currently trending higher alongside its 200-day Simple Moving Average. While price action has trended higher this month, the recent week’s intraday movement has given bulls a hard time, evidenced by the long upper wicks over the past few trading sessions. 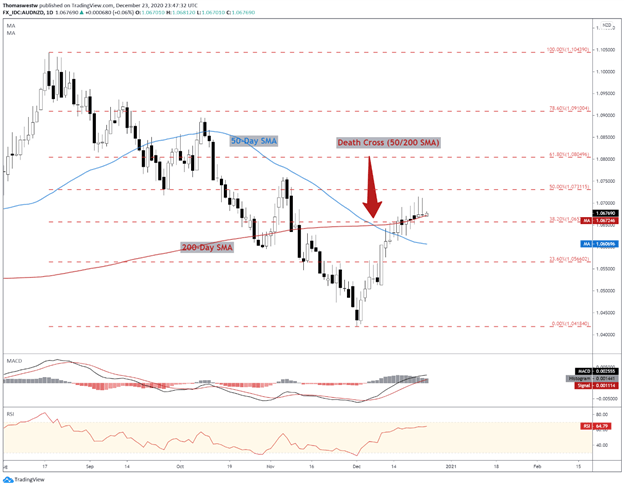