Market action whipsawed today with the U.S. Federal Reserve announcing their December monetary policy decision that saw interest rates remain at the 0.00%-0.25% bound. Updated economic projections reflected an improved outlook amid a post-Covid narrative. The US Dollar pushed lower with the DXY index dropping near the 90.2 level. The Nasdaq Composite and S&P 500 both ended the day higher, while the Dow Jones lagged with a 0.15% drop at the close.

The FOMC rate decision had some traders looking for the Fed to change its structure on the length of Treasury securities purchased within its portfolio in an attempt to keep long-term rates from rising too rapidly as investors grow confident over vaccines and a post-Covid economy. The ten-year Treasury yield whipsawed around the release but settled near 0.92% later in the day. The Fed’s economic projections brightened marginally from earlier in the year with inflation and economic growth expectations ticking higher out until 2023.

Meanwhile, stimulus talks on Capitol Hill appear to be progressing with reports that lawmakers are nearing a compromise with only a few sticking points remaining to be hammered out. The expansion and duration of unemployment benefits are a primary issue. Still, a deal could extend past the end of the week with reports that party leaders have directed congressional members to remain in Washington D.C. this weekend. With the S&P 500 already near record highs amid upbeat optimism over a possible aid package, further upside may be limited with a ‘sell the news’ event possible on news of a breakthrough in talks. 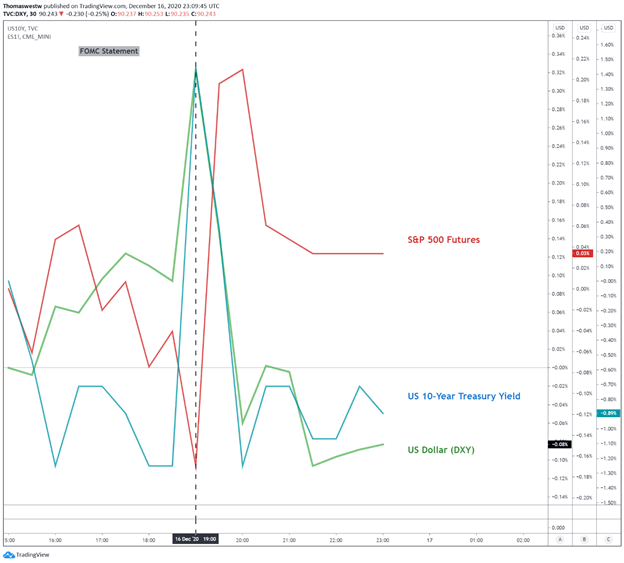 The New Zealand Dollar is flirting with fresh multi-year highs following an impressive local Q3 GDP figure that surpassed expectations according to the DailyFX Economic Calendar. The third-quarter print crossed the wires at 14.0% on a QoQ basis, bringing the New Zealand economy out of a technical recession following contractions in the preceding two quarters. The record-breaking recovery follows a successful containment of Covid cases that allowed businesses to reopen.

Traders will now put the focus on the upcoming Australian jobs report with November positions expected to cross the wires at +50k and an unchanged 7% unemployment rate. These expectations would mark the second consecutive month of gains for the Australian jobs market. A strong report can likely bolster Australian Dollar strength further. However, RBA policymakers may continue to express concern over the high exchange rate despite.

The technical setup in NZD/USD looks tilted for further upside after a pause at the 127.2% Fibonacci extension from the Dec 2019 – March 2020 major move. Momentum continues to look primed to push price action further yet as RSI pushes over the 70 mark and MACD remaining elevated. Moreover, the 20-, 50, 100-, and 200-day moving averages continue to underpin bullish price action. A near-term pullback would likely see some support at the psychologically important 0.70 handle, but without a fundamental shift, a bearish push would likely be short-lived. 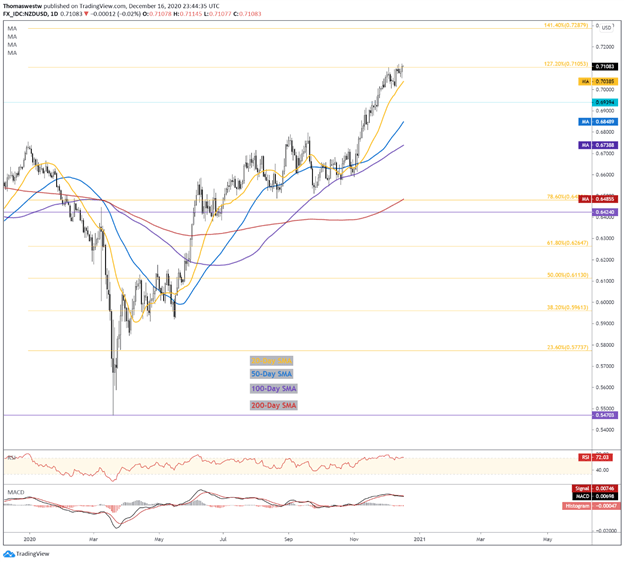