British Pound at Risk on Brexit Impasse, Yen Up as Market Mood Sours

The British Pound is trading a bit heavy in a mostly quiet start to the global trading week amid worries about scope for a last-minute Brexit deal. Time is running out before the formal EU-UK separation at year-end, and negotiators still seem to be too far apart on a handful of key issues. France has threatened to veto a deal that does not adequately address its concerns.

Otherwise, overall sentiment trends are setting a somewhat downbeat tone. Asia-Pacific stock exchanges are tracking lower, in what may reflect a response to Friday’s disappointing US employment data. Many of the region’s export-led economies are vulnerable to weakness in the world’s largest consumer economy, the end-point for a complex web of critical supply chains.

Worries about escalation of the US-China trade war may have soured sentiment further. Reuters reported that the US preparing to sanction at least a dozen more Chinese officials in connection with their role in recent disqualification of legislators in Hong Kong. Beijing has been mostly restrained as the Trump administration has ratcheted up pressure in its final weeks in office. Whether that lasts remains to be seen.

The anti-risk Japanese Yen is up against this backdrop, but the similarly-minded US Dollar is conspicuously soggy. That could be echoing a drop in US Treasury yields, which may reflect weakness on the jobs growth front. Comments from Chicago Fed President Charles Evans cautioned against near-term stimulus expansion bets however, saying that a reassessment of asset purchases may wait until the Spring. 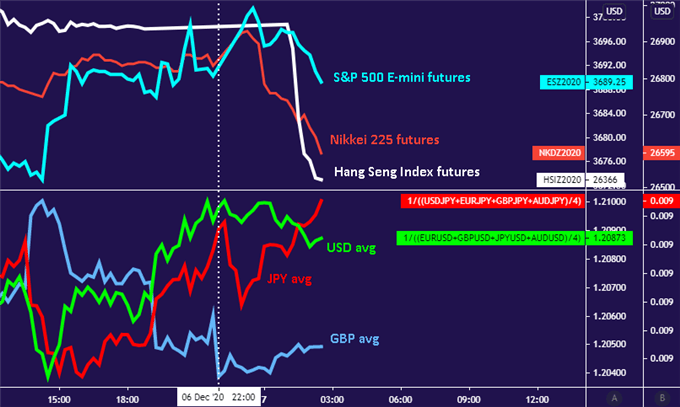 Looking ahead, Chinese trade data is in focus on the data docket. Traders may look to the import/export breakdown as a gauge of internal demand in the world’s second-largest economy as well as a proxy for the trajectory of global consumption trends, considering how many of the world’s final goods pass through the world’s largest cross-border seller.