U.S. equity markets continued to march higher in Wednesday’s New York trading session, with the S&P 500 hitting a record high for the second consecutive day. Tuesday’s gain is mainly attributed to advances in health care and financial stocks. Still, momentum appeared to slow, and the tech-heavy Nasdaq-100 index eked out a gain of only 0.01%. Gold extended gains after a healthy bounce earlier this week.

The slowdown in momentum may pass by as nothing more than a pause before another push higher in the U.S. equity space, but notable risks remain present. Today, the Federal Reserve’s Beige Book highlighted some of those risks. One point of concern is a softening in sentiment around the labor markets. While hiring growth has been steady, firms expressed concern over new lockdowns in the coming months as Covid cases rise sharply in parts of the United States.

Those concerns echoed this morning’s U.S. ADP jobs report that showed a net addition of 307k jobs according to the DailyFX Economic Calendar. The figure was a significant miss compared to economists’ expectations for 404k jobs. Traders will key in on tomorrow’s initial jobless claims and ISM services PMI to gauge the strength of the economy. 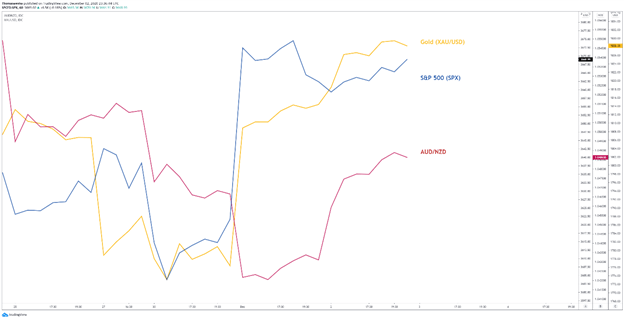 Trading in the Asia-Pacific session may not receive a spillover of sentiment from the U.S. one given the modest moves. Trading may depend on upcoming economic data prints as investors look to evaluate the stance of the global economy. One headline that will warrant particular attention is China’s Caixin PMI figures. Economic strength in China has been a primary driver of sentiment in recent months.

However, a recent headwind for China appeared today out of the United States Congress. The House of Congress passed a bill aimed at delisting Chinese companies that trade on U.S. exchanges. Ultimately, if the bill becomes law, Chinese companies will have three years to comply with additional auditing standards. So, the lack of a reaction in markets is unsurprising. Still, the move signals yet another escalation in the fragile relationship between China and the United States. That said, keeping an eye on the bill’s development would be wise.

Looking at two currencies with high exposure to not only sentiment, but regional headline risks in the Asia-Pacific region shows a bearish outlook in AUD/NZD. The cross is down just over 5% from its 2020 August swing high. The Australian Dollar rallied against the Kiwi, but technical pressure look to remain.

In fact, if the recent pace holds, AUD/NZD will form a Death Cross in the coming days with its 50-day moving average closing in on the 200-day one. The long-term bullish pattern could give a bad omen and likely put a bad taste in AUD/NZD bulls’ mouths.