The Australian Dollar is benefiting from a risk-on surge in markets following the development of several positive tailwinds injecting confidence across the board for traders. Markets cheered as the U.S General Services Administration formally began the transition process for president-elect Joe Biden earlier this week.

Investors saw the news countering market risks from an ongoing contested election, although the Trump campaign’s court challenges continue. The Dow Jones broke over 30,000 for the first time and the S&P 500 also rose to a record close. appeared to boost sentiment further. The former Federal Reserve Chair is seen as being a staunch advocate for additional economic stimulus.

Meanwhile, a worse than expected U.S. consumer confidence figure from the Conference Board failed to dissuade the risk-on movement. According to the DailyFX Economic Calendar, consumer confidence crossed the wires at 96.1, missing expectations for 98.0. For now, the focus appears to be looking into next year when a vaccine will begin to quell the Covid pandemic. In the interim, investors are betting on improved odds for stimulus in the Biden administration’s early days. 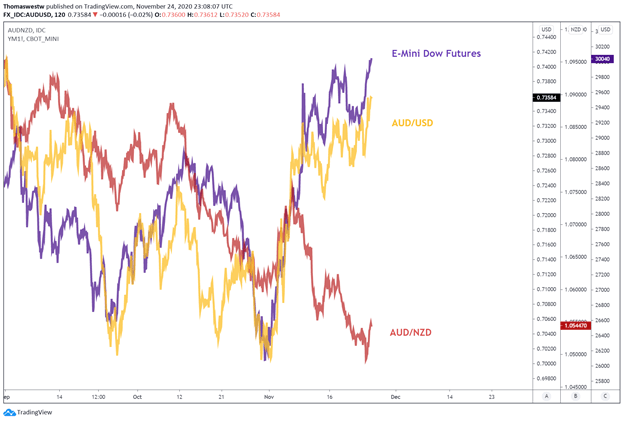 Wednesday’s Asia-Pacific trading session is aiming for a continuation of the upbeat sentiment seen across Wall Street. The risk-sensitive Australian Dollar continued to climb following the U.S. closing bell. AUD/USD eclipsed the September high of 0.7345 and is now within 1% of its 2020 high. The Aussie-Dollar saw less exuberance against the New Zealand Dollar, but recent calls for the RBNZ to include housing prices in its remit has fueled NZD strength over the past 24 hours.

Economic events and data releases are lacking for the upcoming session which may place the focus for traders on market mood. Later this week, however, traders will eye several data prints out of China. Thursday will bring local industrial profits data, followed by NBS Manufacturing PMI on Friday. A strong print from either will likely further propel sentiment.

As market sentiment continues to propel risk-assets higher, the commodity space is also benefiting on the back of better than expected economic prospects. Crude oil traded above its August high as the energy sector forecasted higher demand to fuel a rebounding global economy in 2021. The move in oil stifled some strength in AUD/CAD, but sentiment won over the oil-linked Canadian Dollar with the pair rising nearly half a percent Tuesday. 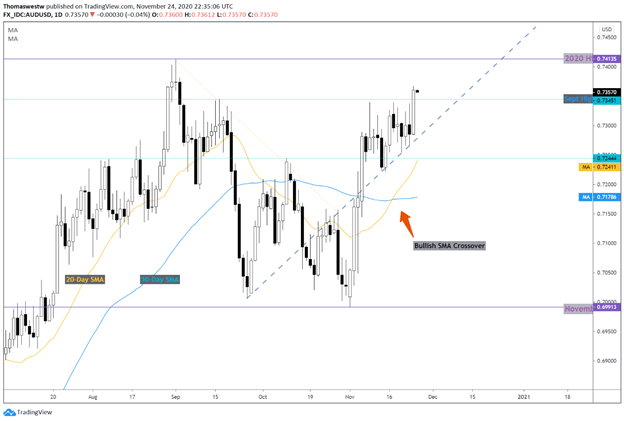