The Japanese Yen strengthened on Tuesday as risk appetite paused during U.S. trading hours. AUD/JPY and NZD/JPY both reversed lower from the previous day’s price action, although Yen strength is starting to ease. Wall Street ended the session lower with the Dow Jones, S&P 500, and Nasdaq indexes finishing down 0.56%, 0.48%, and 0.30% respectively.

The US Dollar also saw broad-based weakness, although not to the extent seen against the more risk-sensitive currencies. Trading in the DXY index was lower by 0.22% as the New York closing bell rang. Despite a weak USD, spot gold prices accelerated to the downside in the latter half of the day.

Judy Shelton, a controversial nominee to the Federal Reserve’s Board of Governors from President Donald Trump, failed to secure the votes required in the Senate. Still, the movement in gold was likely coincidental, as many of Shelton’s views are diametrically opposed to those currently serving on the Board of Governors and the Federal Open Market Committee. 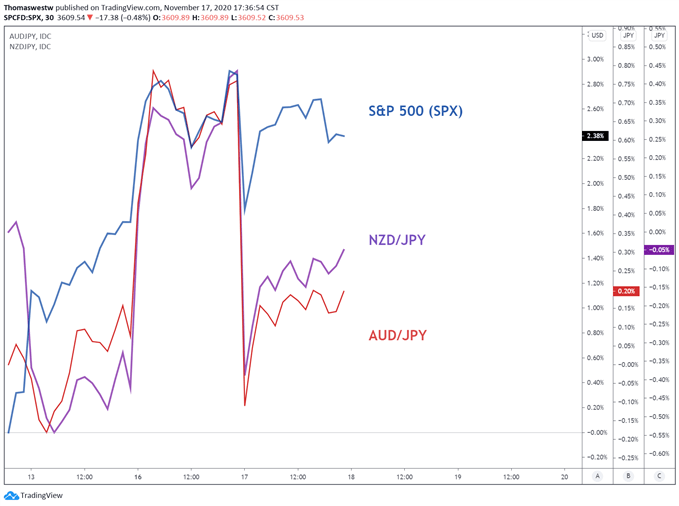 Asia-Pacific stocks are coming off a primarily bullish session on Tuesday. Despite the modest lull in sentiment through U.S. trade, it may not carry over into the APAC session. Earlier this week China, along with 14 other countries in the region, signed the Regional Comprehensive Economic Partnership (RCEP), a massive trade agreement.

The RCEP encompasses over 2 billion people and nearly $27 trillion in global economic production making it the world's largest trading bloc. The deal’s impact won’t be immediate., Nonetheless, it stands as a major achievement for free trade in the region.

Despite the regional economic tailwind from the RCEP, AUD/JPY and NZD/JPY lost ground on Tuesday. Inflows into the safe-haven Yen were likely affected by the drop in Treasury yields. The U.S. 10-year yield dropped by 5.6% on Tuesday. On an inflation-adjusted basis, the higher comparative returns in Japanese government bonds (JGBs) is likely the driver of recent Yen strength.

The Japanese Yen is now pushing below the 76 handle versus the Australian Dollar. AUD/JPY has now retraced nearly half of its bullish candle from last week when the Australian Dollar rocketed higher on vaccine news. Today’s price action may find support near recent intraday lows at 75.90. Below that, the 100-day moving average at 75.66 could offer near-term support. 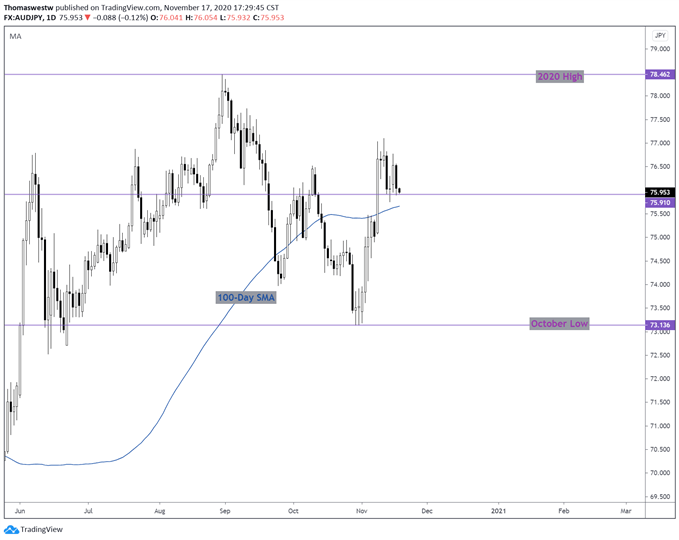