It is finally here. To borrow from an Avengers quote: “We’re in the endgame now”. RealClearPolitics polls for November 3 show Democratic nominee Joe Biden in the lower bound of the rough 7-point average he’s held over incumbent President Donald Trump for a few months. The average is composed of a range of polling agencies that are known for right and left-leaning biases like Rasmussen Reports and Quinnipiac, respectively. 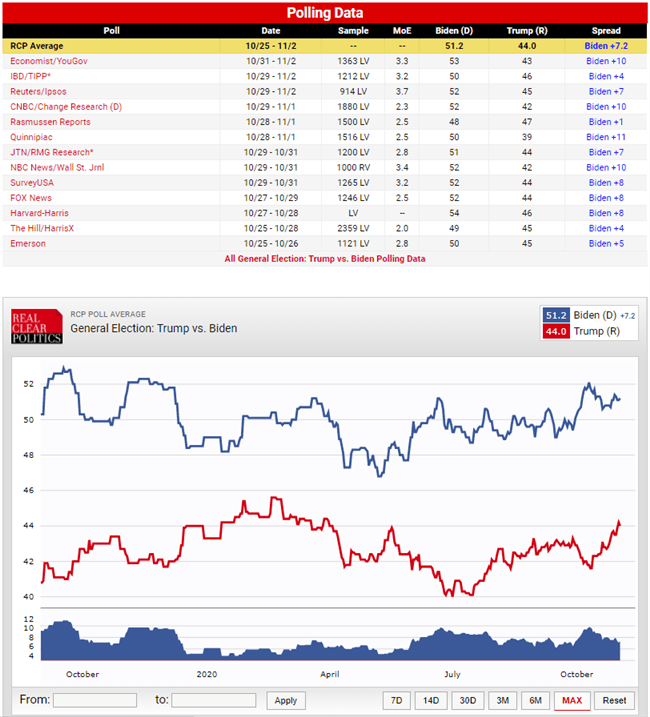 As I noted in prior reports, statistically speaking, Democrats as a group are more likely to vote by mail than their Republican counterparts. As a result, the perception of a so-called “blue wave” might give markets a false sense of certainty. Consequently, the spread between Biden and Trump could significantly narrow once Republicans start voting, and this could throw markets off-tilt if they believe another 2016 scenario is possible.

Mind you, in 2016, all the polling agencies had Secretary of State and then Democratic nominee Hilary Clinton in the lead. According to Politico, Mr. Biden continues to lead in swing states while Mr. Trump is ahead in Republican strongholds like Texas. However, there are growing pockets of blue which are cumulatively starting to make the state look a little more purple.

If Mr. Biden wins, we could see gold prices rally. This may be the result of not only a weakened USD from soft haven demand but also increased expectations of economic stabilization and higher inflation prospects. As an anti-fiat hedge, gold in this scenario may rise along with high-beta currencies like NOK, AUD and NZD.

Not entirely by coincidence, these have the highest implied volatility vs USD over a one week period at 19.75, 15.63 and 15.02, respectively. Crude oil prices may also rise on a brightened growth outlook at the expense of the anti-risk Japanese Yen, Treasuries and USD. Learn more about why this dynamic may reverse if Trump starts leading.

After collapsing below the short-lived uptrend that formed in early-October, gold prices appear to be staging a rebound leading up to and on the election. A Biden-win could see the precious metal surge above the prior uptrend and may reach as high as 1969.19 on political enthusiasm. The converse could be a plunge near or as low as 1810.33. The political volatility of the situation makes markets vulnerable to wild swings.