9 DAYS UNTIL THE US PRESIDENTIAL ELECTION

It is nine days until the election on November 3, and polls continue to show Democratic nominee Joe Biden maintaining his roughly 7-point lead that he’s averaged for a few months. This excludes a brief period of convergence where Mr. Trump almost started to take over. The latter’s popularity plummeted following the first presidential debate and his subsequent contraction of the coronavirus. 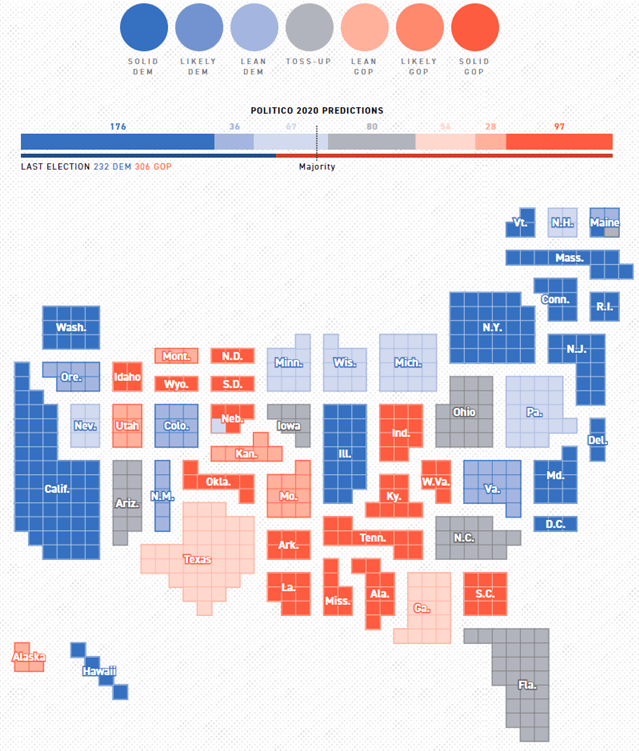 As Politico noted in their report, “Of the four Great Lakes states Trump flipped in 2016, three are now leaning toward Biden — Michigan, Pennsylvania and Wisconsin”. Florida, a key state continues to be the wildcard, with no clear winner. Having said that, collectively, each candidate and their respective donors have put in close to $200 in tv ad money alone.

While the results of the debate are unclear, the muted microphone feature allowed each candidate to better convey their positions on the various issues discussed. This included plans for reopening the economy and dealing with Covid-19 as well as climate change. There did not appear to be a significant market reaction to the debate, likely as a result of investors watching fiscal talks with greater scrutiny.

Traders familiar with the constant and somewhat bland updates during US-China trade war are starting to once again taste the sour fruit from a tree who many thought had dropped its final bearing. Speaker of the House Nancy Pelosi and Treasury Secretary Steven Mnuchin have been announcing updates on progress, but so far markets have not been impressed by these developments.

Until more clarity is given, the S&P 500 index may linger without direction, barring sudden geopolitical developments. Both Pelosi and Mnuchin will likely continue speaking this week in an effort to break the gridlock and pass a bill before November 3, and hope about that prospect could push the S&P 500 higher. From a technical standpoint, a recovery may be starting to take root.

The S&P 500 index may be on the verge of a turnaround after falling over 3 percent before bottoming out at around 3433. Looking ahead, the index may try its hand at recovery the prior week’s losses, with its eye at the all-time high at 3588.1. However, with so many fundamental risks on the table, it is entirely possible that geopolitical risks derail the index’s recovery. 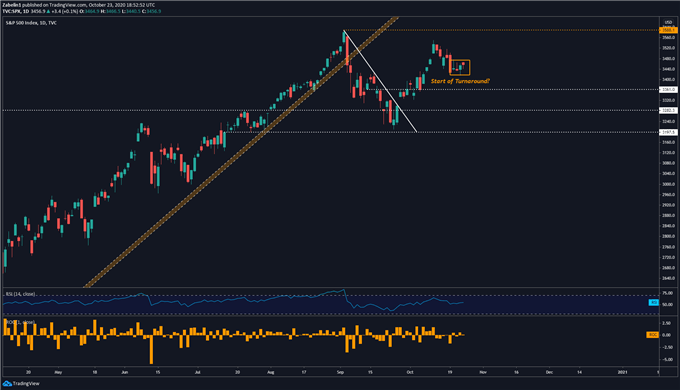