Gold Price Uptrend at Risk Ahead of Third Presidential Debate?

12 DAYS UNTIL THE US PRESIDENTIAL ELECTION

While former Vice President Joe Biden continues to maintain his approximate 7-point average spread over the incumbent President Donald Trump, polls have somewhat narrowed recently. Following the first presidential debate, betting odds surged in the Democratic nominee’s favor, but since then they have shown signs of convergence. What caused the initial widening? 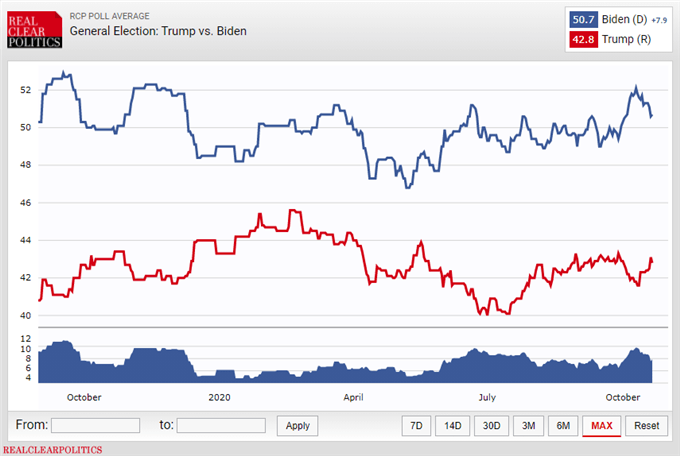 Post-debate polls showed that viewers generally held Mr. Biden in a more favorable light, and his popularity also rose as a function of the erosion of Mr. Trump’s. Following the debate, the President was diagnosed with Covid-19 and was briefly hospitalized. Combined, these factors undermined the incumbent’s popularity, and with the final debate coming up, this dynamic may be amplified if he repeats the same mistakes.

The third and final US presidential debate will take place today from 9:00-10:30 PM ET at Belmont University in Nashville, Tennessee. The moderator will be Kirsten Welker, and the topics to be discussed will be: "Fighting COVID-19," "American Families," "Race in America," "Climate Change," "National Security" and "Leadership.

Market volatility may be relatively subdued since investors appear to be pricing in a victory for Mr. Biden. Having said that, markets risk becoming complacent and trusting polls that incorrectly led traders to believe that Hilary Clinton was going to take the White House. If this phenomenon repeats itself in the considerably more economically and politically-fragile environment, market volatility may surge and push USD higher.

Gold prices have been climbing on a relatively steep uptrend that formed in late September, but the precious metal may soon be in danger of a corrective pullback. Political volatility concerning the US election could raise demand for the haven-linked Greenback while putting a discount on holding a relatively illiquid commodity like gold. 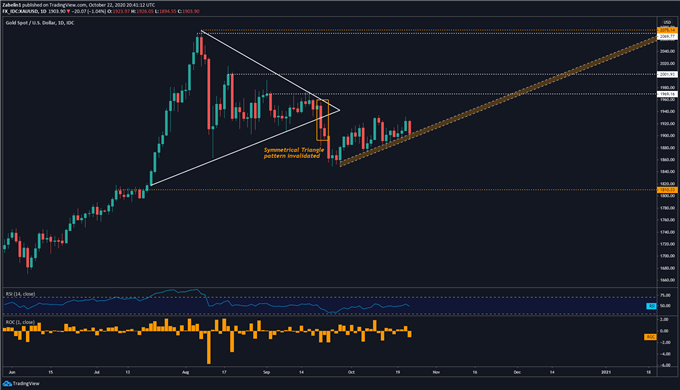 The downside force of both these factors combined could generate significant volatility in XAU/USD and could potentially amplify bearish sentiment if the slope of appreciation is invalidated. In that scenario, selling pressure may start abating around support at blank which also just so happens to market the bottom of a violent selloff in mid-September.