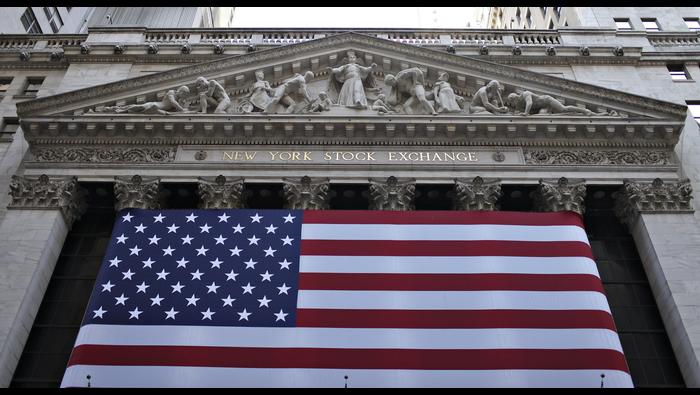 28 DAYS UNTIL THE US PRESIDENTIAL ELECTION

It is officially four weeks until the US presidential election, and political volatility around the situation continues to build. President Donald Trump was recently released from the Walter Reed medical center, where he was being temporarily treated for Covid-19. Despite his quick return to the White House, recent polling data is indicating a landslide victory for Democratic nominee Joe Biden. 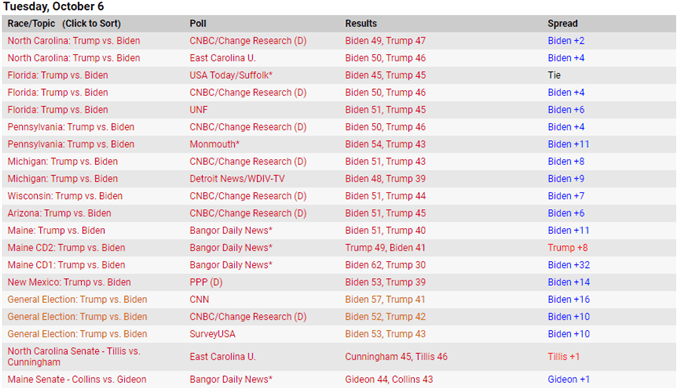 Following the first presidential debate on September 29, the spread between Mr. Biden and Trump widened to 25.5, the biggest divergence ever recorded between the two candidates. With the upcoming vice-presidential debate on October 7, this dynamic will likely be amplified if Biden’s running mate Kamala Harris outperforms VP Mike Pence.

Fiscal Stimulus Talks Break Down, Drag Markets with Them

On Tuesday, US President Donald Trump announced that he is instructing key officials in his administration to cease all fiscal stimulus-related negotiations with Democrats until after the election on November 3. While talks up until this point were not encouraging, market price action suggested that investors were betting that the atmosphere of urgency for additional aid would force Republicans and Democrats to work together.

This kind of sentiment yielded results with Europe when the North-South fissure was temporarily put aside for greater unity, and perhaps investors thought the same political dynamic would occur in the US. House Democrats passed a $2.2 trillion stimulus package last week, but the bill has encountered friction from Republicans who fear that such a large stimulus would balloon the national debt even more.

Why the market reaction to the news of the breakdown in talks between congressional lawmakers has elicited such a strong reaction reflects how urgent stimulus is needed. The growth-stimulating provisions of the last package are fizzling out or have already expired, leaving the economy running on fumes as cases spike and the need to reimpose lockdowns grow. In this environment of uncertainty, the haven-linked USD may rise.

Perhaps not entirely by coincidence, the fundamental backdrop perfectly fits into the technical narrative. AUD/USD has been hovering at the lower tier of a key inflection range between 0.7206 and 0.7181 and is now showing signs of capitulation. The pair experienced its biggest one-day drop since the selling bout in September and may now retest support at 0.7018. 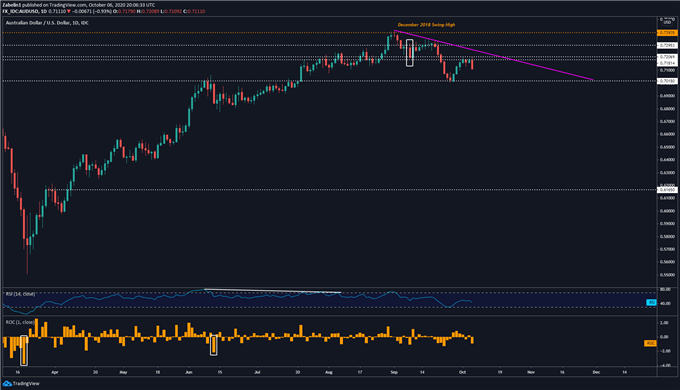