37 DAYS UNTIL THE US PRESIDENTIAL ELECTION

We are officially less than 40 days away from the general election on November 3, and the polls so far continue to show Democratic nominee Joe Biden maintaining a strong lead over the incumbent. Polling data taken as of today show the former Vice President keeping an above-average lead vs Donald Trump as the two prepare for their first one-on-one debate on September 29. 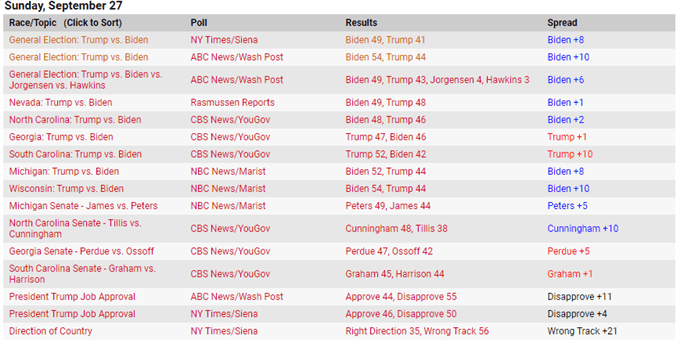 A major point of tension continues to be over the replacement of former Supreme Court judge Ruth Bader Ginsberg. Mr. Trump recently announced Coney Barrett as her replacement, which if confirmed would heavily tilt the ideological composition of the judicial penal overwhelmingly to the right. Given her relatively young age – and with no set term limit – Ms. Barret would be able to serve on the court for a relatively long time.

How Does a Supreme Court Nomination Work? 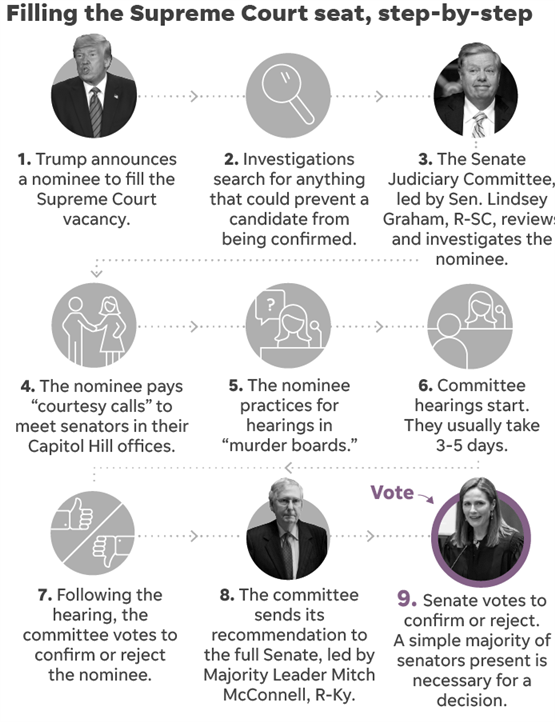 While Trump is eager to put in a justice before the election – which typically takes a little over 70 days – Democrats may attempt to stall the process until after the election. Both sides were already at odds over several policy issues – including the prospect of another round of stimulus – but this recent development could make bipartisan coordination even more difficult.

With economic data beginning to underperform relative to economists’ expectations and the initial rally in statistics and equity markets starting to fade, the urgency for a fiscal boost is growing. At a congressional testimony last week, Fed Chairman Jerome Powell urged – though without taking sides – for policymakers to coordinate additional fiscal stimulus after provisions from the previous package expired.

Without reliable coordination, the prospect of a delayed timetable could sour risk appetite – as we saw last week – and could end up hurting the cycle-sensitive Australian Dollar. At the same time, the increased uncertainty could put a premium on liquidity over returns and catapult the haven-linked US Dollar higher. How might this impact AUD/USD from a technical standpoint?

AUD/USD is currently trading at a key inflection point which previously capped the pair’s gains earlier this year before it capitulated and faced an aggressive selloff. How the pair interacts at this level may be critical. Puncturing support at 0.7018 with follow-through may signal the start of a deeper pullback and could cast a bearish shadow over AUD/USD’s short-term trajectory. 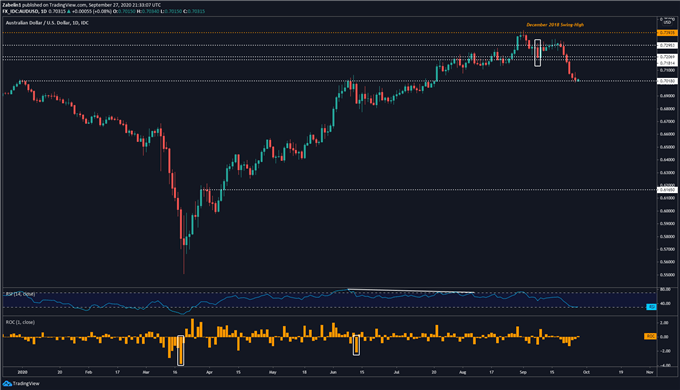