44 DAYS UNTIL THE US PRESIDENTIAL ELECTION

The US presidential election is 44 days away, and polling data continues to show former Vice President and Democratic nominee Joe Biden in the lead over President Donald Trump. General election polling data from NBC News and the Wall Street Journal show an 8-point spread between the two, notably higher than the roughly 7-point average Mr. Biden has maintained over the past few weeks.

Relative to the 2016 election, Mr. Biden is outperforming his predecessor former Secretary of State Hillary Clinton, who on this day four years ago had only a spread of approximately 1.9 points. Key swing states like Florida continue to be the battleground of money, with both the Biden and Trump campaigns collectively putting in more than $50m in TV ad money alone.

The next major event to look out for will be the first presidential debate on September 29. How both candidates perform there could generate short but notable bouts of politically-induced market volatility. What the polls indicate following the debates will be critical, though research has shown that the debates themselves do not always overwhelmingly cause voters to completely reverse or solidify their allegiances.

TikTok Turbulence Eases Up – For Now

On Sunday, TikTok was set to be banned at midnight until the White House last-minute approved of the partnership between Oracle and the social media app. The tech giant will also be working with Walmart to form a company called TikTok Global. The initiative was part of a response by US officials who were concerned about US-based citizens’ user data being used by China’s Communist Party.

However, as part of the deal, TikTok’s parent company Bytedance still holds majority ownership of the company. While the accord temporarily defuses some tension, the sigh of relief is more like a moment of calm before the US-China technological storm resumes. As Secretary of State Mike Pompeo said in a statement, Trump’s executive orders against WeChat and TikTok may be “broader” than just those two firms.

As I’ve written in prior pieces, EUR/USD may be in the process of breaking down as it struggles to stay above two rising support channels – labelled “Uptrend 1” and “Uptrend 2” respectively. The next area to monitor will likely be what could be trend-defining support between 1.1720 and 1.1698. Invalidating that range could cast a bearish shadow over EUR/USD and signal the start of a deeper pullback. 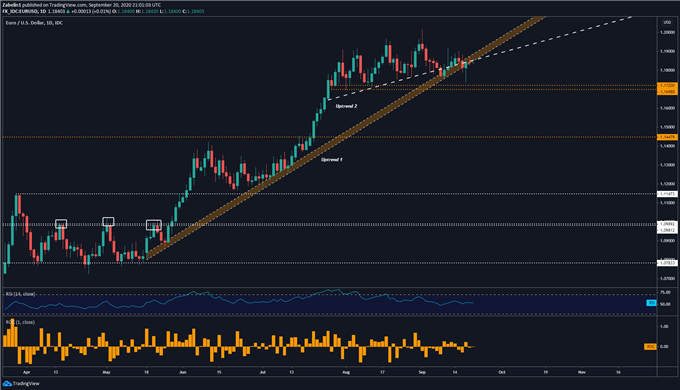