55 DAYS UNTIL THE US PRESIDENTIAL ELECTION

Polling data as of September 9 show Democratic nominee Joe Biden overwhelmingly in the lead over president Donald Trump. This is not only the case for the general election but also in perennial swing states like Pennsylvania, Michigan, Florida, North Carolina and a few others. In total, these battleground states account for about 156 electoral votes. 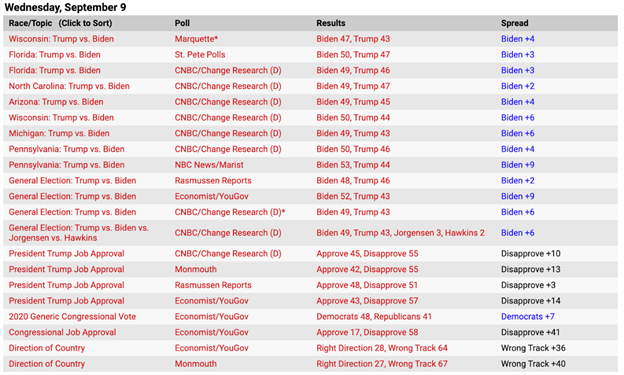 Not entirely by coincidence, these states also host a large number of manufacturing-based enterprises that have suffered from the US-China trade war. While Mr. Trump’s intentions were to reduce the US trade deficit and increase exports to the Asian giant, the economic war led to a severe contraction in manufacturing and dampened business sentiment. 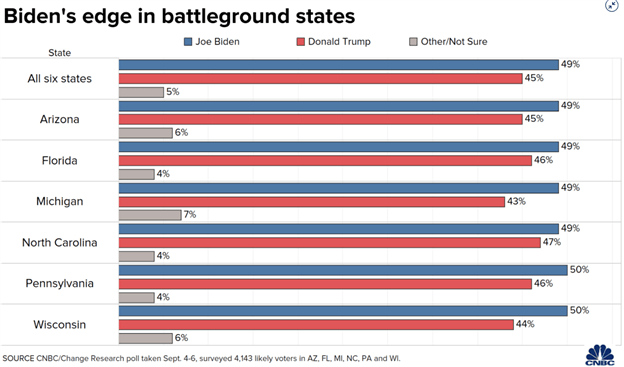 Mr. Biden and his running mate Kamala Harris have repeatedly decried Trump’s trade war with China. The former Vice President said “American farmers have been crushed by [the President’s] tariff war” with Ms. Harris echoing a similar message. Their stance in this regard - especially in light of Trump’s recent comments - may be giving them an edge in these key states.

While this spread between Biden and Trump has recently widened, the latter’s recent comments have added to election uncertainty. Over Labor Day, he delivered remarks about the economy and threw in additional commentary on Sino-US relations. What caught headlines was his use of the word “decouple” when referring to economic relations between the two economies:

While past performance is not indicative of future results, the record shows that when it comes to policy with China, Mr. Trump’s barks are frequently followed by a bite. Consequently, if re-elected, the additional pressure on China and rhetoric of “decoupling” could significantly cool cross-border investment and hamper a recovery from the Covid-induced recession.

Concern about the continuation of escalated US-China tension, particularly as it relates to trade - could boost demand for havens like the Greenback. It also adds additional pressure to the upcoming election. The next major deadline to look out for will be the presidential debate on September 29.

Earlier this week, EUR/USD broke below the modestly, upward-tilting support channel and is now retesting an older slope of appreciation. Where the pair moves from here could be critical. A bounce with follow-through could signal the continuation of a prior uptrend and reinforce what appears to be an underlying bullish narrative.

Conversely, if EUR/USD cracks the floor and is unable to climb above it again, it will likely retest a flat but critical inflection range between 1.1720 and 1.1698. Invalidating that area could amplify bearish sentiment and may signal the start of a broader and deeper reversal.