68 DAYS UNTIL THE US PRESIDENTIAL ELECTION

Democratic Nominee Joe Biden’s lead over President Donald Trump has narrowed according to the most recent poll conducted by RealClearPolitics. Following the second day of the Republican National Convention, the spread narrowed from what was previously in some cases a double-digit lead to now 8 points or in some cases even as low as 1. 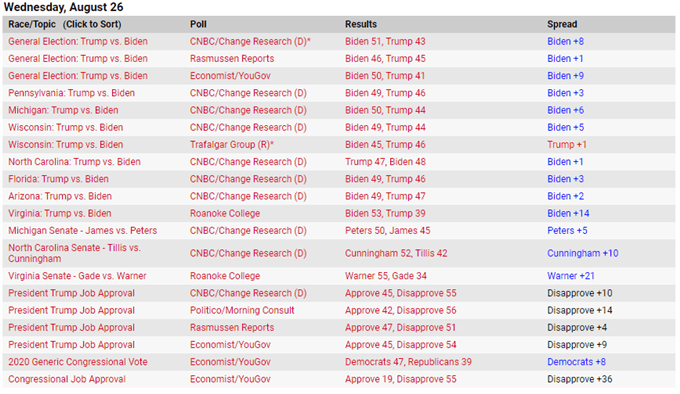 On the second night of the RNC, the speakers included headliners like First Lady Melania Trump, Secretary of State Mike Pompeo and Senator Rand Paul (R-KY). The second night struck a more upbeat tone relative to the first night that was characterized by gloomy presentiments of what an administration under Democrats would look like. Mr. Pompeo also spoke, though not in his capacity as Secretary of State. Learn why here.

Another topic was around the security of blue-collar jobs and the tension between regulation and business. The message overall was in line with Mr. Trump’s “America First” policy which emphasizes a revival of domestic manufacturing and regulatory restructuring. White House Economic Adviser Larry Kudlow also made an appearance and gave a positive outlook for the US economy, referring to “booms” in areas like housing, autos and manufacturing.

On day 3, Vice President Mike Pence is expected to give the headline speech in addition to Second Lady Karen Pence. Rising Republican Star Dan Crenshaw will also be making an appearance along with Senior White House Advisor Kellyanne Conway. If the event leads to a narrower Trump-Biden spread, uncertainty around being able to price in a more likely outcome could rattle risk appetite and undercut the S&P 500.

The S&P 500 index is now a little over 2.30 percent above its March peak and continues to climb above a five-month uptrend. As it climbs into uncharted territory it is difficult to say with confidence where the benchmark might meet resistance. However, in the case of a retreat, history has given market participants potential reference points. 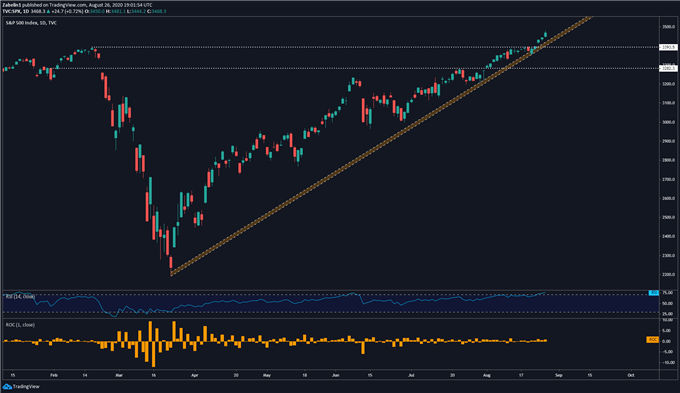 Pulling back from news high could see the index retest the slope of appreciation. If rising support is unable to hold off the weight of increased selling pressure, the next line of defense may be the prior inflection point at 3393.5. A number of factors could catalyze a turn lower. One could be unexpectedly-pessimistic commentary by Fed Chairman Jerome Powell at the Jackson Hole symposium or domestic political volatility from the election.