75 Days Until the US Presidential Election

With less than 80 days ahead of the US presidential election, the impact of polling figures, particularly in battleground states may begin to rattle financial markets. Volatility may also be amplified over concern about the election process itself in light of the ongoing dispute and controversy about mail-in voting. Policy changes in this arena add another layer of uncertainty to the election and could boost demand for havens like USD. 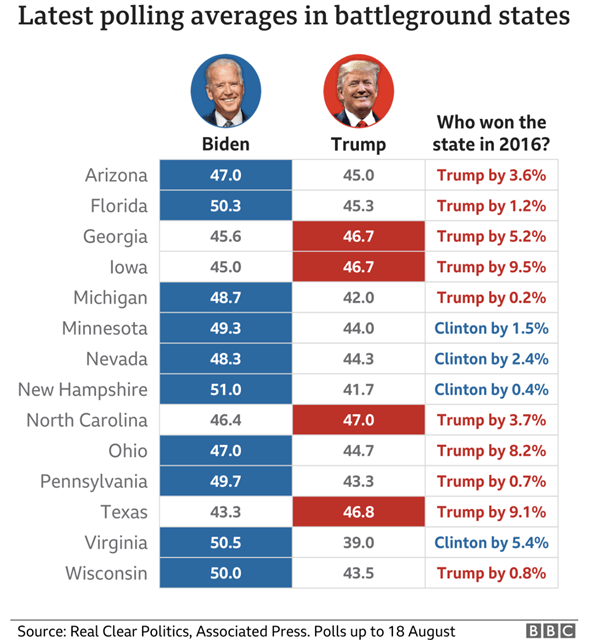 We are on the last day of the August 17-20 Democratic National Convention where Kamala Harris formally accepted the position as Vice President of the United States. On Thursday, former Vice President Joe Biden will accept the presidential nomination. A number of high-profile guests including Cory Booker, Alexandra Ocasio-Cortez are scheduled to speak in an effort to build a broad coalition for the Democratic Party.

The lineup features policymakers of varying ideological inclinations with the idea being that their collective unity and embrace of a single candidate will help consolidate support. This in turn may help increase Mr. Biden’s chances ahead of November 3. With the election so far out, however, the market impact of the convention was unclear.

The next major event to look out for will be the Republic National Convention, which is scheduled to occur August 24-27. The RNC will be held in Charlotte, North Carolina. Much like the DNC, the Republican event will likely be mostly virtual. Some of the headline speakers include former U.N Ambassador Nikki Haley. Trump’s speech at the RNC, particularly concerning foreign policy may be critical in light of recent events.

As I wrote about in my prior piece, tensions between the US and Iran are growing after Secretary of State Mike Pompeo announced that the US is initiating the re-imposition of U.N. sanctions against Iran. Markets may therefore scrutinize President Donald Trump’s speeches, particularly as they relate to foreign policy towards Iran. Over the past two years, Brent has seen episodes of politically-induced shocks. At one point, prices spiked as much as 20% over the course of 24 hours after such an instance.

Crude oil prices are struggling to break above the pre-OPEC plunge at 45.51 in early-Mach as Brent shies away from resistance. Crude’s turn lower will now likely mean the invalidation of the modest uptrend that formed shortly after the prior slope of appreciation was broke in early June. Looking ahead, crude oil selling pressure may swell but Brent may encounter some friction at 41.35. 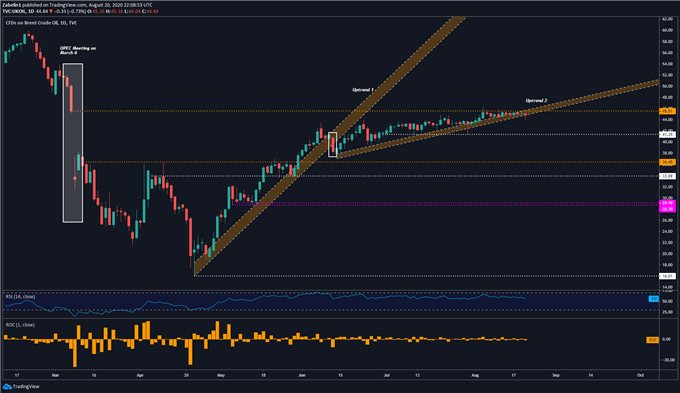