The S&P 500, Dow Jones and Nasdaq Composite wobbled into Wall Street’s close over the past 24 hours. They fell 0.44%, 0.31% and 0.57% respectively. This is as the haven-linked US Dollar appreciated against its major counterparts while the growth-linked Australian Dollar declined. Anti-fiat gold prices succumbed to selling pressure and longer-dated Treasury yields rose.

The culprit was the release of FOMC meeting minutes. The document showed that the Federal Reserve remains quite dovish on the economy, expressing concern about the path to recovery. What seemed to particularly catch the eye of investors were doubts over the potential use of yield curve control (YCC) going forward. If implemented, those could even keep longer-dated Treasury yields capped.

Recommended by Daniel Dubrovsky
What does it take to trade around the Fed and other news?
Get My Guide

Undermining the use of YCC means that certain bonds could remain driven by market forces. This makes gold, a non-interest-bearing asset, relatively less attractive. In fact, recent gains in local 10 and 30-year yields arguably contributed to declines in XAU/USD. This too can undermine the appeal of stocks, coupled with concerns about the economic outlook and insufficient fiscal support.

With that in mind, a relatively light economic docket during Thursday’s Asia Pacific trading session will likely place the focus on sentiment for foreign exchange markets. The People’s Bank of China will update loan prime rates, but those are expected to remain unchanged. If regional stock exchanges follow the pessimistic tone set on Wall Street, the US Dollar could have room to extend gains as AUD/USD declines.

S&P 500 futures fell after prices were unable to pass the all-time high set on February 20th at 3397.50, establishing it as immediate resistance. This also follows persistent negative RSI divergence, a sign of fading upside momentum. Yet, a meaningful turn lower would likely have to make its way under the short-term 20-day Simple Moving Average. Otherwise, a push higher exposes the midpoint of the Fibonacci extension.

How can trader positioning signal trends in markets?
What Do Other Traders Buy/Sell Bets Say About Price Trends?
Register for webinar
Join now
Webinar has ended 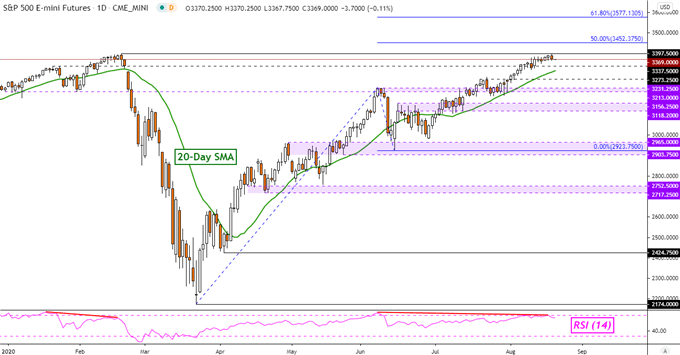