The sentiment-linked Australian Dollar and similarly-behaving New Zealand Dollar could be at risk of turning lower after a relatively mixed session. On Thursday, the Dow Jones and S&P 500 closed -0.58% and -0.21% respectively after wiping out gains as much as 1 percent. The Euro outperformed as markets digested the European Commission proposing an ambitious recovery fund as the haven-linked US Dollar declined.

Investors turned risk averse after US President Donald Trump announced that he will hold a news conference later today on China. This follows Chinese legislatures voting to endorse a proposed security law for Hong Kong. In recent weeks, escalating tensions between the world’s largest economies have been likely adding an additional layer of uncertainty to the road to recovery from the coronavirus outbreak.

This development likely overshadowed earlier optimism on US continuing claims unexpectedly dipping to 21.05m for the week ending May 16 against the anticipation of a 25.68m outcome. As this data is more timely, markets may have overlooked the second estimate of local first-quarter GDP which was revised softer to -5.0% q/q from -4.8% anticipated.

A consequence of Trump’s news conference later today is that it could leave financial markets in limbo as investors struggle to price in the exact outcome. There is also the question of what Beijing could do as countermeasures in the event Washington pushes for bold action, such as economic sanctions or tariffs. China is Australia’s largest trading partner, and it may have to brace for the knock-on risks of tit-for-tat exchanges.

It is thus unsurprising perhaps that AUD/USD has left behind a Doji candlestick on the daily chart below. This pattern is a sign of indecision which typically carries greater significance when it occurs at peaks or troughs. In this case, the emergence of the Doji just under key resistance – a range between 0.6645 – 0.6685 – could speak to a potential top in the works. Follow-through is critical when it comes to these candlestick patterns. A turn lower through support at 0.6624 exposes lows from the beginning of this month. 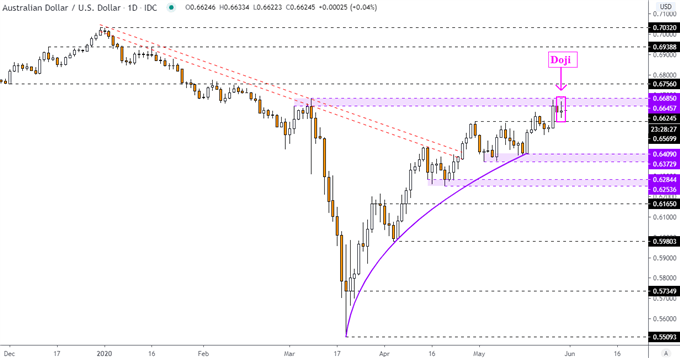