The sentiment-linked New Zealand and Australian Dollars underperformed on Wednesday, struggling to capitalize on a late-day rally in equities during the North American trading session. The S&P 500 flipped from a -0.75% decline to a +1.48% gain as the Dow Jones closed +2.21% higher. The British Pound depreciated as political uncertainty simmered ahead of UK-EU Brexit talks.

Some of the best-performing stocks were from non-essential service companies related to travel. These included cruise lines (Carnival Corporation +5.9%) and airlines (United Airlines +3.89%). This may speak to rising bets that a gradual easing in lockdown measures may reinvigorate demand for discretionary spending. The latter is a category of goods and services usually heavy hit during periods of economic uncertainty.

Meanwhile tensions between the world’s largest economies could continue brewing. The House passed the Uighur Bill which opens the door to sanctions against Chinese officials over human rights abuses on Muslim minorities. This follows China pushing for more stringent control over Hong Kong. Further escalation from here could complicate the recovery process from the pandemic with Trump having hinted at retaliatory tariffs.

What are some unique aspects of trading currencies?

The ‘risk-on’ tilt from Wednesday could echo into Thursday’s Asia Pacific trading session, perhaps opening the door for the New Zealand Dollar gain. That may leave the anti-risk Japanese Yen and similarly-behaving US Dollar vulnerable.

The Australian Dollar may see volatility on a speech from RBA Governor Philip Lowe who will appear before the Senate Select Committee to talk about the coronavirus. AUD/USD’s broader trajectory could however remain focused on risk appetite with the central bank seemingly unlikely to act on interest rates in the near term.

From a technical standpoint, NZD/USD appears to be attempting to resume the dominant uptrend since bottoming in late March. Prices have recently taken out key resistance (0.6130 – 0.6156) and a rising trend line from the middle of May seems to be guiding the pair cautiously higher – blue line.

Still, prices stalled after leaving behind resistance at 0.6233 as negative RSI divergence emerged. The latter is a sign of fading momentum and can at times precede a turn lower. Resuming the uptrend entails taking out the current May peak, exposing highs from March. 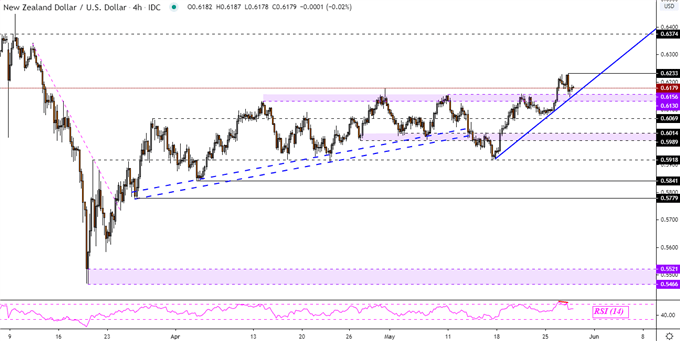